Well, it’s certainly not because of my allergies.

Sometimes I think living in Arizona is like a badge of honor.  We complain about the heat in the summer, the humidity during monsoons (everyone east of the Rockies scoffs at this…”Girl, you have no idea what real humidity is…”), the allergens during the spring, the dust, the traffic…

So why the heck do we stay?

I can’t speak for the rest of the residents, but based on what I feel is the current over-population, obviously something is keeping us here.

Me, I’m an Arizona native.  I’ve been fortunate enough to have had the opportunity to do some pretty awesome traveling, and as much as I love going to other places…I love coming home.  I honestly don’t feel an overwhelming desire to move out of the state, despite falling in love with a select few other areas in the country.  (None of them have yet managed to put up enough pros to outweigh staying in this state.)

The horse thing is a large part of why I stay.  Arizona is a big state.  And I’ve had the chance to ride in many different parts of it.  (Pretty much all but the far northern part…such as the Grand Canyon…one of these days…)

And it always amazes me how different the state is, even within the span of 50 miles of a ride.  So with that, I give you the Tour de Places-Ashley-Has-Ridden.

I love having all of my photos organized and accessible.  It means I tend to actually blog with pictures a lot more readily.

And because I’m easily amused and need no excuse to play around with Google Earth, I’m including relevant  approximate elevations.

The Salt River area has Bulldog Canyon and the trails around the Blue Point Recreation Area.  Immediately on the south side of these mountains is Usery Mtn Park:

A little to the south by another half an hour or so, and my typical riding stomping grounds, is the San Tan Park in Queen Creek.

Keep on heading south…waaaay south (like, just-north-of-the-Mexican-border-south) and you run into Sonoita and the Old Pueblo/Las Cienegas endurance rides down there.

Re-centering on Phoenix and heading west, there’s Estrella Mountain Park.  Back to what I consider “normal” desert with all the usual suspects…lots of washes, lots of cactus, and in certain times of the year, if you’re really lucky, a few wisps of desert grass.

I did quite a bit of riding between the three parks: Usery, San Tan, and Estrella.  They have civilized trailheads with water, trailer parking, and signed trails.  Which also means they host a plethora of hikers and mountain bikers.  Good desensitization training.

Bouncing back to the east side, another hour or so past the previously explored area of Usery Mtn and the Salt River, is a beautiful trailhead called Picketpost Mountain.  It’s the host of the section of The Arizona Trail that runs right through the area.  If you follow the trail to the north, you see this: 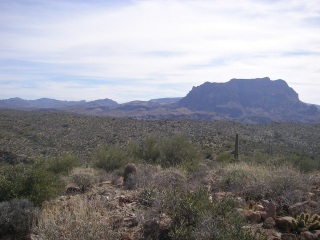 But if you go south, you ride right up against this:

Back into the Valley, just northeast of Phoenix, there’s the area that I call the North Scottsdale/Fountain Hills/Rio Verde confluence.  Dad’s first horse came from the Rio Verde area, we spent quite a lot of time trail riding in the Rio Verde Foothills area, and McDowell Mtn Park is located there.

In the northwestern part of the Valley, there’s Wickenburg, site of quite a few rides we’ve done: 2 NATRC and 4 endurance.

Head out of the Valley northeast about 2 hours, and you’ll hit Payson.  It’s in the mountains, so it’s much cooler, and a good summer option.  Payson itself has very little by way of trails, but if you head due east, you quickly run into several trail options.

Head northwest from Payson, and you run into the little towns of Pine and Strawberry.  They’re also right below the Rim, and actually at a lower elevation than the more easterly-located Payson area trailheads.

Now we’re in the mountains, which are something of a fascination and novel concept to this long-time desert rat.  North of Phoenix by a couple of hours is Prescott, which is an amazing range of micro-climates within a very short span of time.  Exhibit A, Man Against Horse 50:

Another hour or so north of Prescott is Flagstaff.  Flagstaff is pine trees and snow skis (for at least a couple of months in the winter).  And the best summer escape destination.  Fortunately, there are some nice horse camps up there to accommodate the droves of Valley-dwellers that make frequent weekend pilgrimages.

Flagstaff is green and gorgeous…but I wouldn’t live there.  Too much of that white, fluffy stuff in the winter.

West of Flagstaff is the “gateway to the Grand Canyon”: Williams.  My overwhelming takeaway impressions of Williams are if your horse doesn’t trip on the rocks and fall and squish you, then you’ll both be eaten alive by the vampire-alike no-see-ums.

Williams is also the location of Al-Marah Arabians’ Hat Ranch, where they let the babies run around and grow up for a couple of years, which goes a long way towards explaining why they seem to produce some outstanding endurance horses.

Maybe there is something to survival of the fittest?

Finally, just for kicks…Y’all want to know where I live?

In the middle of suburbia, surrounded by a sea of tile roofs.
(Question: If the plural of “hoof” is “hooves,” wouldn’t it make sense for the plural of “roof” to be “rooves”?  This is why I didn’t become an English major.)
Elevation: Just over 1200′.  No wonder my respiratory system protests 5000’+.
Looking at where I get to ride, sometimes I forget I still live in suburbia.
And that riding variety is probably the Number One reason why I love Arizona.
(The sand washes make for good conditioning, too.)

4 thoughts on “Why I Love Arizona”