In honor on Mimi’s 25th birthday this past weekend, I’d like to present, in no particular order:

“25 Mimi Moments: The good, bad, and random (because there’s no ugly about her)” 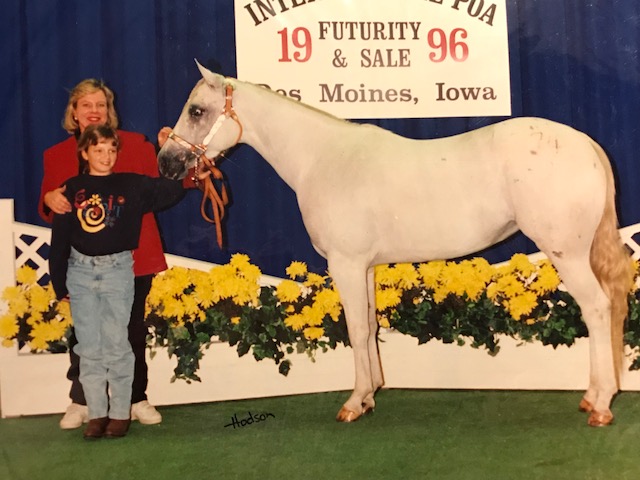 Still one of the best days of my life: When this little grey mare came into it. I still get butterflies and chills thinking about it. The annual POA sale is run as an auction format, and my parents and I went back to Iowa with a list of ponies in the sale catalog to look at. Mimi was all of our first choice…and she’s been my #1 ever since. 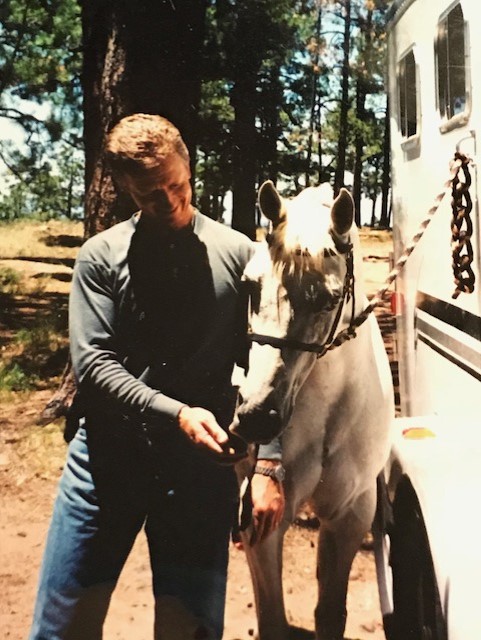 Little known fact: My father actually picked Mimi out. She grabbed his attention right from the get-go on our first time even skimming through the sale catalog, and she was the first horse we even crossed paths with at the sale when he saw her out in a warm-up ring being ridden by her owner. He’s got a major soft spot for that little pony, and she’s quite fond of him. 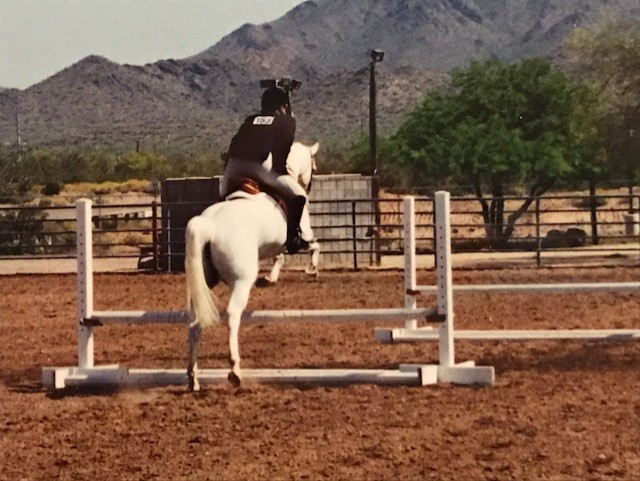 We have a complicated relationship with jumping. When she was “on” she was a blast to jump, but she was the most dishonest jumper I’ve ever ridden. Because she’s so quick and squirrely, she could bury herself into the base of the jump, and then spin off literally at takeoff. There were multiple occasions that I went over the jump…and she didn’t. Some of it I now know was likely due to saddle fit, and too narrow of a saddle that pinched her shoulders. 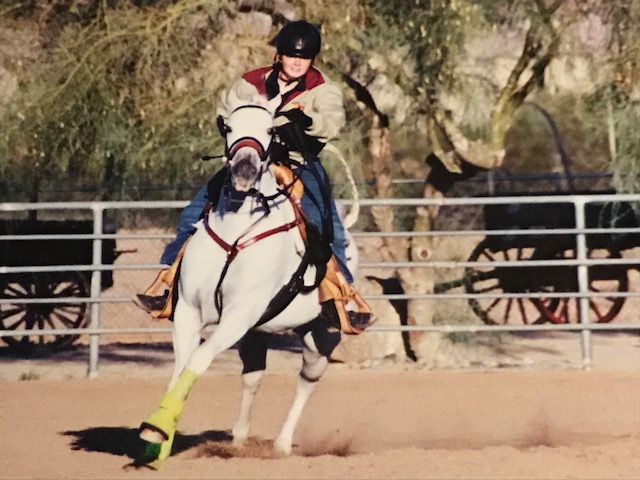 Her most iconic gymkhana pose. She was an absolute blast to run through games. I really took my time with her, trotting and slow loping the patterns for a couple of years for her to learn them — skill before speed. So by the time I introduced the speed element, she had the precision down, and was an expert at flying around the last pole or barrel and absolutely launching. I’m holding on because otherwise, I very likely would have gone off the back of the saddle.

She’s really loud. For a small pony, she has an incredible set of lungs, and an eardrum-piercing shriek that she makes full use of, especially in a public environment. Everyone knows when she shows up somewhere. 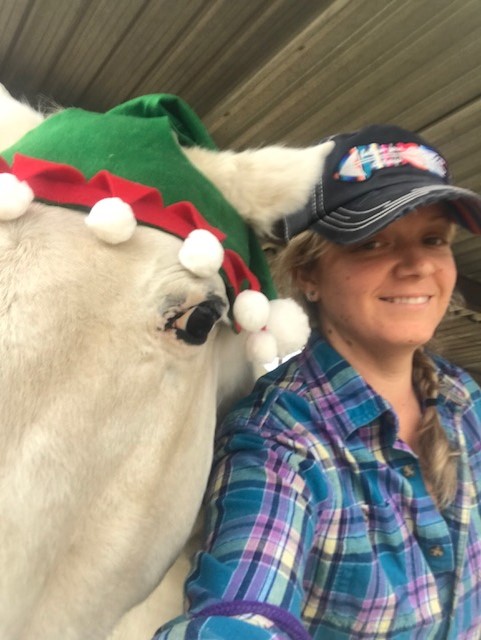 She doesn’t find my shenanigans very funny. For years, I’ve tormented her as my personal “My Little Pony” with things like festive hats and costume classes, and her predictable reaction almost every time is, “idiot human.”

She doesn’t actively like very many horses. She’s very independent out in the herd, and typically hangs out by herself. There are maybe a handful of horses over the years she has truly liked, although she’s a shameless, indiscriminate flirt during certain times of the year. Most of the time she’s either tolerant or indifferent, and then other couple of handfuls of horses she actively dislikes.

Wiggle lips! She’s super-expressive with her lips, especially when she has itchy spots. Scratch her along her belly-line and it’ll send her into lip-wriggling ecstasy. 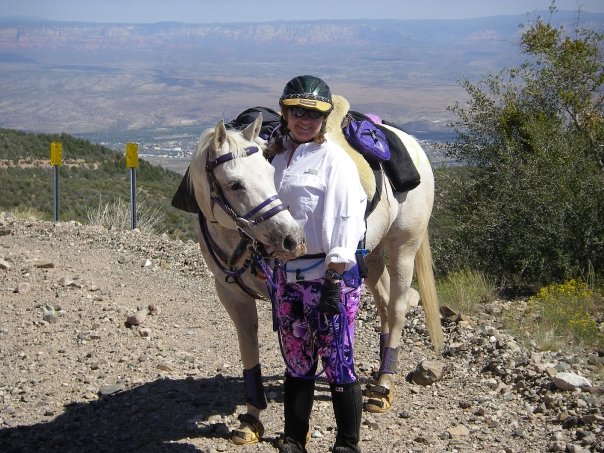 Finishing the Man Against Horse 50 was one of my proudest accomplishments with her. It’s a really tough ride, and she never put a hoof wrong the whole time.

We went all the way to Oklahoma for the biggest show of our career…and I forgot a class pattern for the first (and only) time, and she dumped me in the warm-up ring. 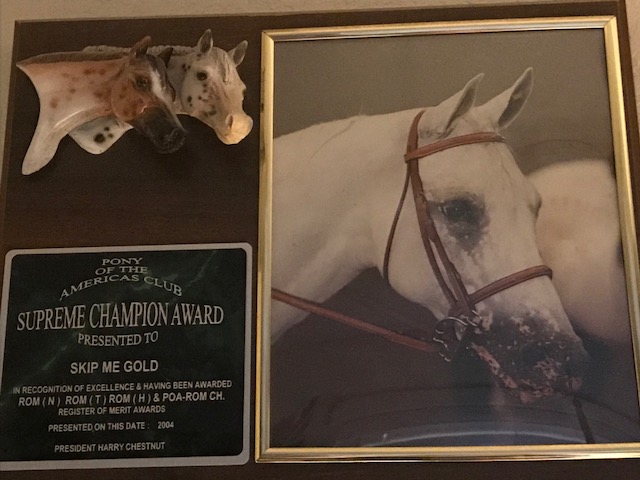 My greatest accomplishment in her show career was earning her Supreme Championship. For a POA to get “supreme’d” as it is known, they have to earn a certain number of points in three different divisions: Halter, Non-Timed (performance), and Timed (gymkhana). And a certain percentage of those points had to come from what would be the equivalent of “rated” shows. She came to me with about half of the required Halter points, but she and I got all of the necessary performance class points together.

Out of everything we’ve done together, endurance riding has been the favorite. She’s the absolutely happiest when she’s going down the trail in the lead, and allowed to comfortably move out. We did a couple of rides by ourselves, but her favorite was with one other horse, preferably behind her. She likes a trail buddy, but she wants to be in the lead. 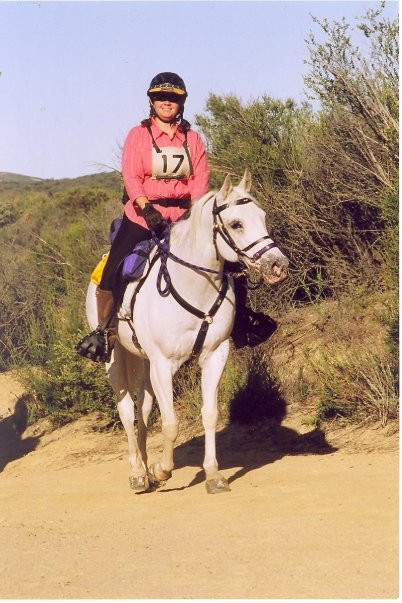 On our very last NATRC ride, she was well-behaved enough to earn me a perfect 100 horsemanship score.

She’s really well-trained, and incredibly soft in the arena. I can ride her in anything, including bridleless. But out on trail, she thinks snaffles are the best joke ever and gleefully runs through them. Either her s-hackamore, or something with leverage (kimberwick) reminds her she does have brakes installed. 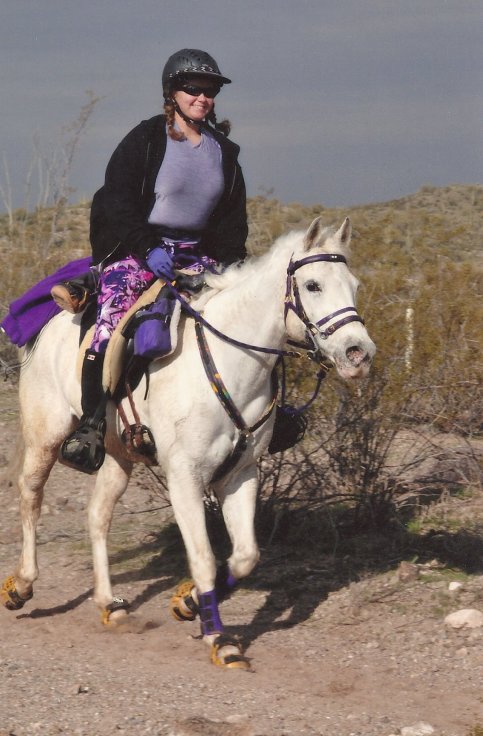 We didn’t do a ton of endurance rides together — 7 50s, and half a dozen 25s. She was a blast to ride in LDs, and we finished all of them, including a couple of Top Tens. We’re 4/7 on the 50s, but all of our rides together have been memorable. I always worried if 50s were too much for her, but only one pull was for her (a tie-up halfway through). Looking back, I probably didn’t give her enough credit, but I’ve always been overprotective of her, and so afraid of hurting her.

She’s a desert rat, through and through. Every time we’ve gone up to the mountains, she’s definitely on way higher alert. Stumps and logs are suspicious, and deer and elk are equinivorous.

As much as I trust her…she can also unnerve me faster than almost any horse out there. To this day, I still don’t enjoy riding her out around the barn neighborhood. She’s still very quick and can be very reactive in that particular setting, and I still have a hard time relaxing and enjoying this kind of riding with her. Give us the actual trails any day. 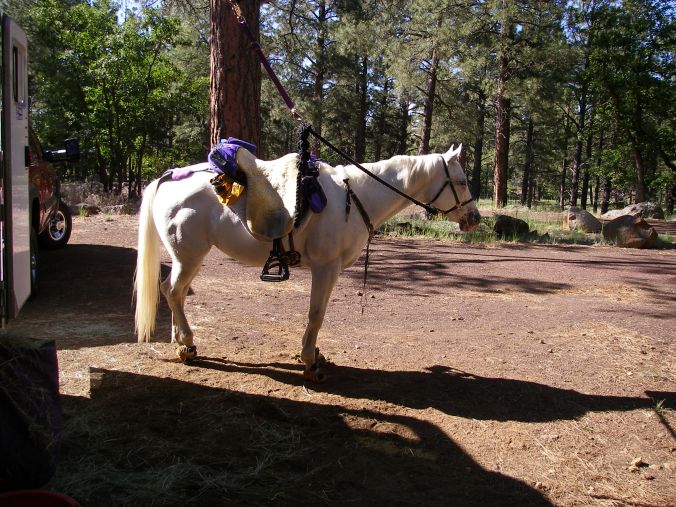 She is the best camper. Years of showing gave her experience with standing around and waiting, and standing tied at the trailer. Her worst indiscretion is beating her haybag against the trailer.

She’s naturally a very alert and attentive horse who notices everything. It was a really big switch going from pretty placid lesson horses to the spicy firecracker that she was — and still is. For years, I assumed that if she “looked” at something, she was going to spook at it, so I tended to be the “death grip, super controlling” rider. She’s a saint for putting up with me. Eventually I learned that just because she looked didn’t mean she was going to spook, so gradually did get more relaxed. Of course, she still had to keep me on my toes — I ate dirt more than once over being too relaxed and complacent, and she would pull a fast spin and teleport maneuver.

She’s really smart about drinking when she’s thirsty. Several times at rides, she deliberately stopped and moved off-trail to a hidden water tank — once, quite memorably, in the middle of a canter up a big wash with several other horses.

She used to be absolutely terrified of cows. Then she learned they run away if you chase them. Cow aversion be gone. Now I have to keep her from trying to chase them down.

She is sooo picky about her bits, and not shy about telling me her opinion. I’ve narrowed it down to 3 bits that she actually likes. All Myler, of course. Preferably the handmade ones with the sweet-iron mouthpiece. She’s the reason I got into collecting bits.

Her feet are a constant source of aggravation (and learning experience) for me. They’ve never been great, although they’re now light years better than when I first took her barefoot. But I still have to really stay on top of things, and “self-trimming” is not a concept that exists in Pony World.

She is the most interested, multi-faceted, layered equine I’ve ever been around. She can be a bit mercurial (sometimes sweet and cuddly, sometimes bitchy mare), but she has taught me so much about patience, thinking, listening, partnership, forgiveness, humility, confidence…most of my life lessons have been connected to her. She’s my best friend.