So I’m still catching up…March has been a busy month that’s seen me head down to Florida for the FITS ride for work (company rep), back home for a few days, and then off to Reno for the AERC Convention. Coming up, I’m catering one of my mom’s workshop events, and then will be setting up at The Mane Event expo here in Scottsdale at the end of the month. Whew.

In a nutshell, Florida was awesome, and I even got to sneak in a short training ride on some of the most beautiful footing I’ve ever seen. 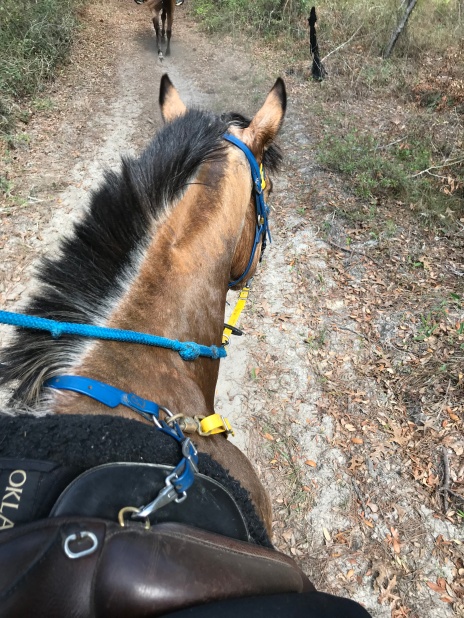 This was my 7th year attending the AERC Convention, and it was the best yet. I had some phenomenal help in running the Renegade Hoof Boots booth (Tim & Lara, who helped me out at Horse Expo last year, and are AZ-based long-time Renegade users/dealers, with Tim also being a trimmer), I got my annual All-You-Can-Eat sushi fix, it was probably the best-attended convention to date since I’ve started attending…and the topper…

I WON THE TEVIS ENTRY IN THE RAFFLE!!! 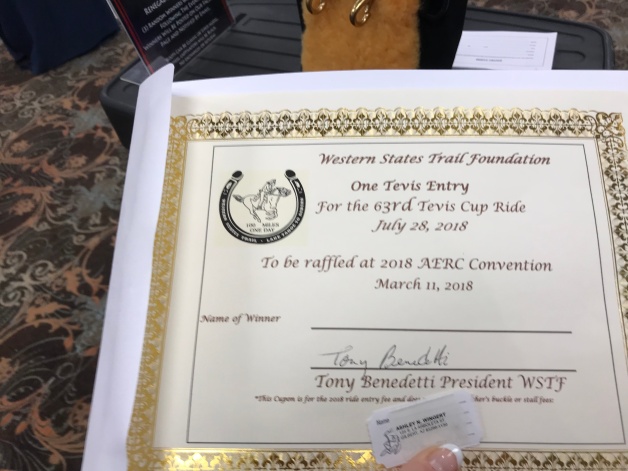 I threw the vast majority of my tickets into the National, SW Region, and MT Region buckets — cool stuff in the National bucket (scored a $100 Riding Warehouse gift card out of that, as a matter of fact), and both SW and MT region had ride certificates up for grabs for rides I was likely to attend.

Only a few of my rather substantial number of tickets went into the separate Tevis entry drawing…just for fun. Because what are the odds, right?

Barbara White (holder of the record number of Tevis buckles) is my new best friend, because out of all those tickets in the bin to the left, she pulled mine out. That’s got to be good luck…
photo by Merri Melde

I still don’t know if my epically stunned face after the announcement was ever captured on camera, but I’m pretty sure that was a good minute+ of “wait, was that my name?” processing going on before I managed to make my feet move from where I had been standing. I also think that’s one of the first times I’ve been stunned into silence…normally I announce my excitement with ear-piercing shrieks. This time, I was reduced to nonsensical babbling.

Four days later, I’m still pinching myself. I actually have the Tevis entry printed out and sitting next to my desk. Not filled out yet, obviously, but I’ve got time, and I’ve already reached out to my endurance network to see if anyone has a spare horse they’d like ridden…I’ve got ideas, and a possibility or two in the pipeline, so it’ll be interesting to see how the next few months shake out. All I know is, this is my 10th year attending Tevis, and I can’t think of a more fitting way to celebrate that than to ride it, God willing.

Obviously, winning the entry was the absolute highlight of the weekend, but even without that, it would have been an outstanding weekend. Reno is my favorite place to have the Convention (even if the hotel was more smoke-filled than I’ve ever experienced…even in the “nonsmoking” rooms, the stale smoke smell permeates the entire place), if only for the fact so many of my endurance friends attend. And it seemed like in was really well-attended this year. Definitely more vendors than in the last few years, and while I can’t speak for other vendors, I know we had a steady stream of people at the Renegade booth all weekend. 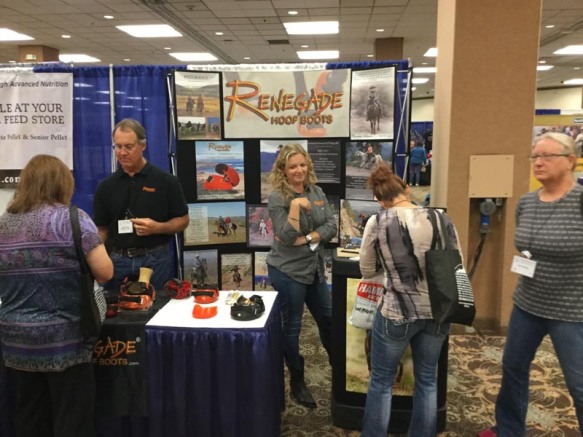 Working the booth. Not sure what I was in the middle of doing or saying.
photo by Merri Melde

Tim & Lara were great to work with — they’ve been using the boots for almost as long as I have, and Tim is a trimmer, so is an incredibly knowledgeable resource to have available, as he can directly address trimming questions that people may have, or take a barefoot horse-keeping conversation far deeper and more involved than just “how do I put the boot on?”

Closeup of the photo display 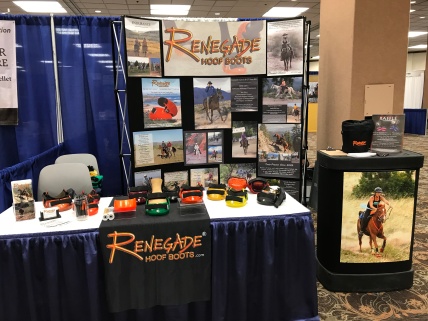 Booth in all of its colorful glory

I had a new display format for this year — a popup display with velcro-receptive fabric panels that allows me to print out photos/posters, attach velcro to them, and then change them out at will or to match a particular event/discipline. I really like it, and although I had to play some major “photo Tetris” while setting everything set up, the end result looked phenomenal.

I also did my annual “drool over ReactorPanel Saddles” booth visit. I finally got to ride in one down in Florida, and it totally sold me on them. I think I’ve finally narrowed down my favorites to the Tribute Trail with the endurance knee blocks (which, curiously enough, on a sawhorse, I’m like, “meh” about…but on a moving horse, they are phenomenal), or the HTT (flapless Heraldic on Tribute Tree) with the scooped bumps. Methinks I need to buy some raffle tickets for the RP drawing at Tevis this year. Because raffle luck…

HTT (Heraldic, aka “flapless” on Tribute Tree) with “scooped” though bumps

Reno is also known as the AYCE (All You Can Eat) sushi capital of the world, so it’s become somewhat of an annual tradition for a group of us to go out one evening. And it’s really fun with a larger group (we had 10 this time), because you end up ordering so many different varieties, and getting to try everything.

I also had to keep my resident tack ho status firmly in place, and came home with a pair of mohair reins from Wild West Endurance Company (formerly Hooves N Whiskers), and a saddle pad and Myler bit scored from the tack swap. (I also brought stuff to sell at the tack swap and most of it sold, so the karmic sales/purchase ratio remains in balance.)

Shopping and drooling. The purple/black/natural braid is a sample of the same colors as my reins. I want the black/turquoise combo on a future chestnut, though.

I failed to get any photos of getting dressed up for the Saturday night awards dinner, but I wore a dress, and had sparkly glitter high heels. I can wear more than just riding tights and running clothes.

I’ve learned the hard way not to schedule early morning flights out of Reno, since Saturday inevitably turns into a late night…that always coincides with the changing of the clocks for Daylight Saving Time. That’s one hour of lost sleep I’m never gonna get back.

Anyway…flight out wasn’t until the afternoon, so I could sleep in a bit, grab breakfast, and then wander down to catch the last hour+ of the AERC board of director’s meeting, which was quite interesting. I ran for SW Region director this past election cycle and didn’t make it, which I look at now and realize was a good thing. I would have been eaten alive. You have to have some pretty thick skin to be on the board, and not be afraid of confrontation and conflict. So maybe not now…but maybe in a few years. I like that they open up the meeting to members, so if I attend a few more of those and get a better feel for how the whole thing works, I’ll be in a better spot down the road to run and subsequently hold my own if elected.

Flying home was uneventful, even if Sky Harbor airport was an absolute madhouse zoo coming home. I think my parents will thank me if I can avoid flying home on a Sunday evening again any time in the near future, since that’s two Sundays in a row they faced down hellacious airport traffic for me. ;)

Starting now, my goal is to cram in as much saddle time as I can…I’ll be chasing down catch rides left and right, in addition to seeing what the pony may be feeling up to in-between. I’m also planning to up my fitness/workout regime to more than the 2x/week I do now, so that no matter what horse I end u[ riding, I know that I’ll be ready for it.

Plus, I’ve got new toys to play with…not that I need any excuse for good saddle time.

Tonto Twist 50 last weekend. Atti looked and felt phenomenal day long...right up until we got pulled for lameness at the finish. In spite of that, Tonto is still one of my favorite Arizona endurance rides. Beautiful trails and scenery (that’s only 30 mins away from my house), and a total frills ride with ride management that thinks of all the details big and small. This pic feels a bit like a walking catalog advertisement for all the gear I ❤️, though. Saddle: @frankbainessaddlery; pad: D’Lua Park merino wool saddle cloth; @totalsaddlefit stirrup leathers; @renegadehoofboots spare boot; @zilco.equestrian headstall; tights: @bareequestrian @cristinabel1014 📸 @bonmillerphoto #aerc #aerc_endurance #enduranceriding #endurancehorse #tontotwist50 #almaraharabians #catchriding #bareequestrian