After not doing a ride for roughly 2 years (January 2011), and with somewhat negligible saddle time over the past six months, I survived the Fire Mountain 30 this past weekend. Actually, more than survived: I had a blast!

I got an invitation to come ride from friend Kaity, who is working with a mentally-young greenie this spring. It would be said greenie’s first ride, and would I be interested in coming out to ride her seasoned endurance horse Kody and act as a chaperone/babysitter?

I had to think about that one for all of two seconds. I shoved aside that annoying little voice that reminded me of how little saddle time I’ve had over the past six months, and what time I’ve had has not been high intensity distance training. Shut up, little voice. I capitalized on the fact I am still somewhat young and stretchy, and bounce back quickly. That, and a few Aleve tucked into the saddle pack.

My trip started on Thursday, driving out to Kaity’s house in the Southern California high desert. It’s about a 6-hour drive and it passed uneventfully. (File that away for later.) I-10 isn’t my favorite drive, since it’s 1) boring and 2) a main thoroughfare for big rigs, which aren’t my favorite thing to share the road space with in areas that are only two lanes in each direction. Ah, well. At least I wasn’t hauling a trailer.

Thursday afternoon was spent packing and food shopping, since both Kaity and I view endurance rides as a really good excuse to eat.

Fire Mountain was being held in Ridgecrest, so during the drive up, I got an overview of the rides in the area, and major highlights and landmarks pointed out to me, including areas covered by Death Valley Encounter and 20 Mule Team. (And since the plan is for me to crew 20MT at the end of next month, I got to preview proposed crew spots…in daylight!)

I got really spoiled over this ride weekend with the chance to sleep in luxury: Kaity’s friends had brought their camper for us to stay in. Bathroom, running water, fridge, HEAT!!! That was most excellent and greatly appreciated.

We went out for a pre-ride Friday afternoon, where I got my first riding introduction to Kody. I’ve known and seen photos of this horse since Kaity got him as a fuzzy little baby. He’s 9 this year and has grown up into a really nice horse. Kaity has done a wonderful job of training him and he was an absolute delight to ride all weekend. Soft, responsive, no pull, no spook.

I’m going to try a slightly different approach and go with a picture story this time. Enjoy!

And a shout-out: My tights in the photos were made by my friend Diane Stevens of Crazy Legs Tights. I wrote an earlier initial review on them, but this is the first true ride test I’ve put them through and I couldn’t be more thrilled. A proper review in a separate post to follow.

That was the last of the photos of the day: We had to really make time on that second loop and I don’t quite have the art of “speed trotting and cantering on a strange horse while taking photos” down yet.

Day two, Kaity rode Kody on the 50 while I stayed with Ani in camp. Ani got to experience “buddy leaves and comes back” multiple times and he held it together well. Taking him for multiple walks around camp helped.

Since Ridgecrest is only about an hour and half away from Kaity’s, we did decide to head back to her place that evening. Something about me having to head back on Monday, work the rest of the week, et cetera.

(Although the really awesome thing was this was in part a work trip: When I wasn’t riding, I was available as a Renegade rep, and ended up meeting with several people over the course of the weekend. Way fun, and I’m finding out just how much I’m enjoying expanding my network and meeting new people. Plus it’s always awesome to get to chat with like-minded horse people and pick the brains of endurance people with waaaaayyyyyyy more experience than myself.)
And Kody rode in Renegades all weekend. No problems whatsoever. He’s an example of how you don’t always go by the book: His long pasterns require much more clearance on the pastern strap than the standard two fingers. But that’s what works for him and the boots stay on.
Completion awards for the weekend: 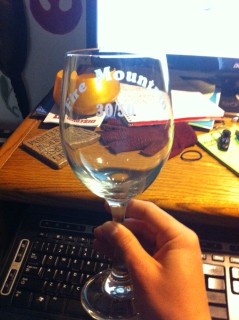 I think wine glasses are an awesome idea. I love my ride t-shirts, but I’m liking this idea of expanding the awards repertoire even more. After all, you can only wear one t-shirt at a time. Although technically I guess you could wear a long-sleeved shirt, with a short sleeve over it (or under, depending on fit) and a sweatshirt over the whole thing. And a hat on top. Then carry a wine glass in one hand, and a coffee mug in the other, with a water bottle stuffed in a pocket and a bucket hanging from your arm. And a halter on your horse. And blanket. And sit in a chair.
Okay, stopping now.
Anyway, I wasn’t in too much of a hurry to head out of there. If I left too early, I would probably run into SoCal rush hour down the hill in the great freeway jumble. And if I left at a semi-reasonable hour, I would hit Phoenix rush hour. So it was about 1pm by the time I found myself reluctantly pulling out of Kaity’s driveway. (We’ve known each other since we were young teenagers — we used to show in POA together [read: against each other] and then did NATRC, and then endurance — and we really don’t get to see each other nearly enough. Truly amazing good friends are hard to come by, and she’s one of them.)
The trip back started out equally uneventful. I was making really good time, traffic wasn’t too bad, and the audiobook was being a sufficient boredom buster.
And the all havoc broke loose.
I’d noticed the suburban had been a little twitchy in its handling for the last half an hour or so. I chalked it up to the fact it is 14 years old and has over 202,000 miles on it. I would have been surprised if a long road trip like this hadn’t caused a few new rattles and rumbles.
So I’m clipping along at 75mph…roughly an hour and half outside of Phoenix at this point…not too far off from Tonopah…and I hear the most horrendous banging noise coming from the rear end of the ‘burb. It sounded like something exploded back there. Simultaneously, the rear end started wobbling…fortunately, it’s a heavy enough vehicle that it takes a lot to make it truly fishtail.
Unfortunately for me, I was in the far left lane at that point, since I’d just passed a line of semis. Fortunately, there was a little shoulder plus a wide dirt median right there, safe enough for me to at least get out of traffic.
My first thought was something mechanical, that the rear end had fallen off, or I’d dropped the transmission or something equally horrible.
Not quite.
Just the most epic tire blowout I’ve ever seen on a passenger vehicle.
Want to know what 10-ply, Class E tires look like when they blow?
This:

At that point, the tread was still attached. It was still daylight, although I was rapidly losing the light, and I was at a place on the highway where I could see back several miles. I was able to wait until there was a huge gap in traffic, thump-thump-thump my way across two lanes, and pull way over onto the right shoulder…at which point, the tread completely came off (in one piece) and lay neatly next to the (very) flat tire.
I probably turned the air around me blue from my mouth in the next few minutes as I went through the thought process of:
– I can change it.
– I’ve never changed a tire.
– It’ll be okay, I think I can manage it.
– Where do I place the jack?
– I’m losing the light.
– Changing a tire on the side of the highway in the middle of nowhere as a young woman, completely alone, is a dumb idea.
– This is the first flat the Burb has ever had on the road.
– The spare tire has never been used. In 14 years. I’ve never aired it up, either.
– *$#%*#&@$*&%&!!!!!!!!!!!
Long story short, I do have ER roadside assistance through my car insurance. I made use of it, as well as my tax dollars by calling DPS out there. Roadside assistance aired up the spare, changed the tire, packed up my oversized souvenir, and sent me on my way. The whole thing took about two hours…which isn’t bad, considering just how out in the middle of nowhere I was.
I missed Phoenix rush hour traffic. :)
I still have no idea why the tire blew. They are 60,000-mile tires with about 34,000 miles on them, and in the last month, have had two different tire places have occasion to see them and have them deemed “looking good!”
So who knows.
It’s not a road trip without some kind of adventure…and I’m going to learn how to change a tire.
Next time: Let’s discuss the ever-popular “Lessons Learned” and what did/didn’t work. Also, how my pony managed to pick the one weekend I was gone to injure herself. (Nothing too serious, fortunately.)
And Saturday’s completion netted me my first LD mileage patch for 250 miles. :)

8 thoughts on “Ride Story: Back in the (Ride) Saddle: Fire Mountain 30”