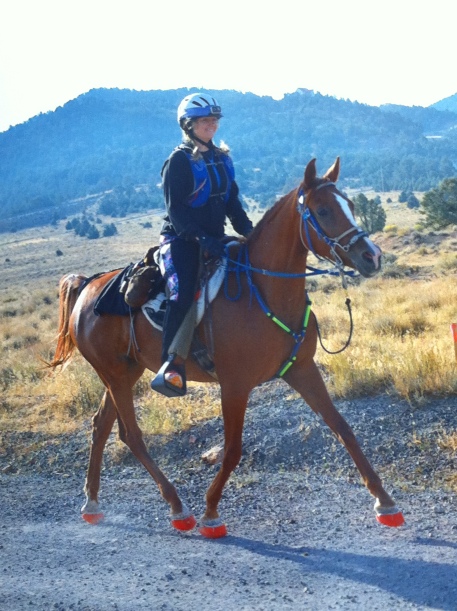 Striding out; I guess she likes her boots. Photo by Gore-Baylor Photography.

After 11 years of competing in Renegade Hoof Boots, I did something a little bit different: used the Renegade Pro-Comp Glue-Ons when I did Virginia City 100.

Up to this point, I’ve never felt a need to bother with gluing on. All of the strap boots I’ve used (both Classic and Viper models) have worked well, and any problems have been minor, easily resolvable, and/or a side effect of being a part of the R&D process.

But 100 miles over lots of rocks is a different kettle of fish. To help mitigate the effects of the concussion from that much hard-pack surface, as well as the rocks, I really wanted to use the pour-in gel pads Renegade offers. For most horses and most circumstances, they’re not necessary…but these were not usual circumstances. The downside to the gel pads is they do take up some space inside the boot where the hoof would normally seat. On some horses, it doesn’t seem to make a difference, but on others, it can change the fit enough so that boot retention becomes more of a challenge. Using the glue-ons in conjunction with the gel pads would (hopefully) mitigate that and be one less thing for me to obsess over during the ride. (All that said, strap Renegades have been used at Virginia City 100 before and successfully completed the ride.)

“care package” from work: all the hoofwear a girl can dream of (glue-ons, extra glue-ons, and strap Vipers to carry as spares)

I follow the basic protocols as outlined on the Renegade page: http://www.renegadehoofboots.com/glueon.html, with a couple of modifications along the way to accommodate using the gel pads.

Gluing is pretty much a three-handed job, so I didn’t end up with any pictures of the process other than the finished product, but the videos in the above link give a really good visual demonstration.

Hoof prep is critical. I can just about guarantee that the vast majority of glue-on losses are from either insufficient/incorrect prep, or the wrong size.

Supplies– Renegade Pro-Comp Glue-Ons
– Vettec Adhere glue
– Vettec Dispenser gun (I really like the Deluxe one)
– Vettec mixing tips (I allow at least 2/hoof, plus extras for ‘oops’ moments)
– 36-grit sandpaper (I use 3M “Green Corp” file sheets, which have a mineral blend in them that makes for a sharp-edged grit that will actually score into the hoof, versus a rounded grain that will polish it)
– sanding block
– denatured alcohol (rubbing alcohol is not the same)
– small spray bottle
– paper towels
– latex gloves (unless you want to be peeling glue off your fingers for the next week)
– flathead screwdriver
– rasp
– hoof stand (optional, especially if you have a clean, flat surface)
– hoof nippers (or straight edge blade; these are to cut the tip off the Adhere

– Extra Helper (it is possible to glue by one’s self, especially with a very well-behaved horse, but it is so much easier to have a helper there to hold the horse, or pick up a leg, or hand you something)

the split can be seen, especially on the left boot, at the inside toe quarter

Removing the boots can be fairly strait forward, or more time-consuming. They are intended as a single-use product, as it is difficult, or at least time-consuming, to remove all of the old glue from the boots, and a re-glue rarely bonds as well as a brand-new boot.

The quick-n-dirty way is to take a straight edge blade (like a box cutter) and cut along the spot where the boot wall meets the boot sole. The bottom can then be popped off, and the side walls peeled away from the hoof wall with hoof nipper or pliers.

If you really want to save the boots (either for re-use or, like I did, R&D purposes), then it’s the old “screwdriver and mallet” process: Insert flathead screwdriver at a point between hoof wall and boot wall (I find it easiest to start at the quarters), tap with mallet until it cracks the glue, work your way around the hoof.

An alternate to this, thanks to a suggestion from Lucy, is to use a tool used for changing out motorcycle tires — a “tire spoon.” It has a rounded head on it that has a slight curve — position it properly and it actually curves away from the hoof wall, preventing gouging into the wall.

Why I wanted to “save” the boots — to see wear patterns in the gel pads, as well as glue in the boots. Nothing under the hooves, and I had an equal mix of glue that stuck to the hoof and what stuck to the boot. 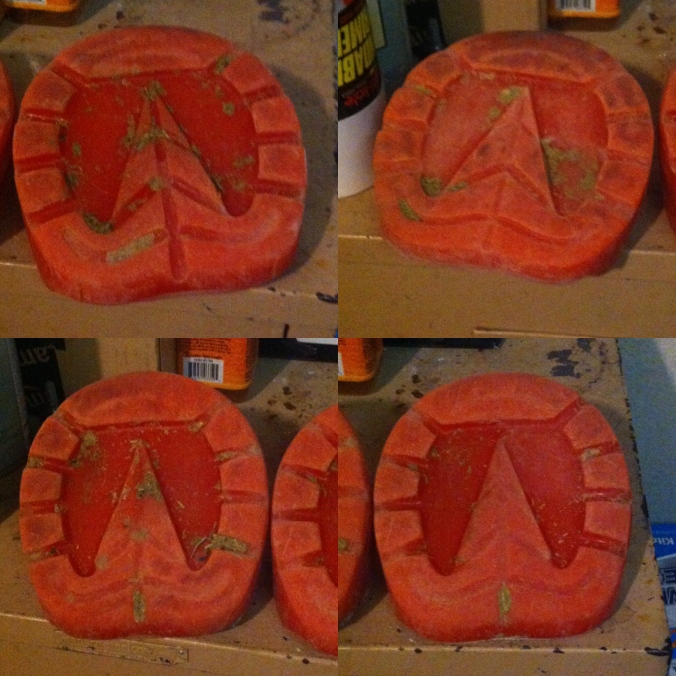 Tread wear. Not bad for 76 miles of very rough trail.

They stayed put for 76 very rocky miles, and as tough as they were to get off, I doubt the last 24 (easier) miles would have done anything to budge them.

For a trail that eats hoofwear (I saw all manner of boots, multiple brands, laying along the trail), I am extremely pleased with how my gluing process did. I don’t particularly like gluing — it’s kind of a pain, especially when you have strap boots that are easy to apply and stay on — but glue-ons do have their place, and it’s a good tool to keep in my arsenal of tricks.

Beeba had one hoof that was a little funky in how it sized — the 0 was way too tight, but the 1 was a little looser than I would have liked. But the same principle applies to fitting Glue-Ons as the strap boots — loose is better than tight; a bit of excess space can always be filled with Adhere, but too tight of a boot will end up popping off the hoof. It was the right front, and in the photos above, you can see how much extra glue I ended up using, and I was never pleased with how it looked…but it stayed on.

I experienced a slight crimp in my plans when a major storm came through where we were camping the Wednesday before the ride, flooding the horses stalls and making soggy hooves unavoidable. Crap. This was problematic on multiple levels:

So I dumped a bag of shavings in the stall to sop up any excess water, sent a couple of texts to the bosses to go over gluing protocols, got reassured that some extra denatured alcohol would take care of the problem, and tried to put aside my worries for the rest of the evening.

The next day dawned sunny and breezy, which dried things out in no time, so some of my concerns started fading. I did a couple sprays of denatured alcohol on Beeba’s hooves before we loaded up to head over to ridecamp, and between that, the trailer ride over, and then hanging out on the very dry parking lot at camp, by the time I was ready to glue on Thursday afternoon, any excess moisture levels were a total non-issue.

This has been a summer of gluing for me, between practice rounds on Mimi, and gluing for/at the Tevis Ed Ride. It’s not hard, per se…it really just takes being able to follow directions, be organized, and have the right tools.