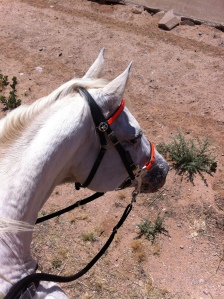 Part of having an older pony is management…and part of management is recognizing they have good days and bad days in terms of how “functional” they are.

From a “normal” perspective, Mimi is still very functional. But my perspective is a bit skewed, coming from the angle of a high-demand performance sport…so I’ve had to learn to readjust my settings to better align with what she is capable of offering me at this time.

It’s a bit of a roulette game in that I’m never quite sure on any given day what her level of function will be. Since I’m pretty sure what I’m dealing with is a creaky/crunchy/arthritis/aging joints scenario, “function” or lack thereof generally relates to how she’s moving, and her general outlook on life, and I have to go down to the barn ready to either move forward with potential plans for activity, or be willing to alter/cancel those plans at the last minute is she’s just not feeling it that day.

“Trails” around the barn, such are they are. At least it’s open space and (mostly, sans some gopher holes) good footing.

Fortunately, as the weather gets warmer, the happier she is, and a 10-minute loose-rein walking warm-up goes a long way towards better performance as well.

Yesterday was a good day, so after an arena warm up, we headed out around the barn neighborhood…not my favorite compared to real trails, but better than endless arena circles.

She’s always very “up” in a urban/semi-urban setting, despite having lived in some kind of a more-urban-than-rural setting for the past 18-1/2 years. Some of that is probably me — we had some “incidents” fairly early on, including a spin-n-bolt parting of the ways that resulted in me splatting and road rash sliding on pavement at a young-and-impressionable enough age that I’m pretty sure I’m still subconsciously cringing.

Yes, I can handle narrow, drop-off, cliffy trails way better than I can handle a stroll around the urban neighborhood. Judge at will.

But honestly? Most Arabs don’t have anything on this pony in terms of “up”ness, reactivity, and the power to pull a fast one.

And yet I still adore this pony. She makes me a better rider, even now, and I have to actively ride her shenanigans and manage the zoom-brain. (There’s a reason she’s the original Go Pony.)

In a very cheerful, “let’s do something!” mood.

I also finally managed to make the English hackamore I’ve had laying around here for ages work properly. In the past, I always issues with the shanks sitting up too high (to the front of her face, not height in relation to length of the face), thus bringing the headstall cheekpieces way too close to her eyes. So I pulled off the traditional fleece-padded leather noseband that comes standard on many of these types of hackamores and replaced it with one of my longer and lower-profile beta nosebands.

And it worked. I was finally able to position the hackamore in a way that was functional and not too close to her eyes.

Why mess around with another headstall?

Because I can. :) I love messing around with different bits/hackamores/headstalls/etc, just to see how they all work, and the different effects of each one. This style of hackamore is very mild in terms of leverage and severity; and I know I definitely had “less” brakes with this set-up on this particular horse than her standard s-hackamore or a bit. Probably good I never got it rigged up for an actual ride, but for yesterday’s purpose — a ride that requires some pretty good contact and “hold” at points — it worked quite well, as she was not in a frame of mind to be allowed too much loose rein, but I didn’t have to feel to bad about hanging on her mouth or exerting too much pressure on her.

(Will also likely be a good introduction to bitless riding for future young horses without quite as many/as strong pressure points as the s-hack.)

It’s also an environment that encourages very good control of your horse — despite it being a residential area, people zip by really fast, and there’s some real redneck-in-the-worst-sense-of-the-word behavior, especially when it comes to driving…not at all uncommon for people to speed up, rev engines, or squeal tires. So you might call it defensive riding, but there’s not a ton of leeway there to be able to handle overreactive spooks or antics. 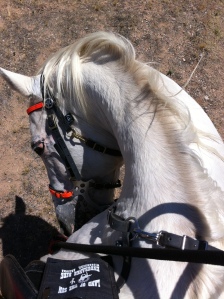 Fortunately for us, the idiots were not out in force, so I only had to give the stink-eye to a couple of people that went zooming by, and the pony’s only major indiscretion of the whole time was to forget herself in her “want to trot” quest and trip on a pavement-to-dirt transition, for which she was spoken sharply to and then made to walk as punishment. The horrors.

Vacant property was housing a hawk — we stopped to watch him for a few moments, and he was holding some kind of prey (gopher, looked like) when he took off. 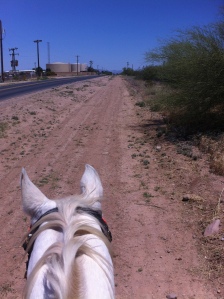 “Open space. Can I GOOOOOOO???”
(No, you may not, since cars like to zip by at way-over-the-speed-limit on the [residential] road next to us.)

And then once we were done, she got a nice bath, as it is officially summer here in the Valley of the Sun. Really can’t complain, though, as we were fortunate enough to have an unseasonably-pleasant May. And hot weather just means the inevitable overspray from horse bathing feels really good. All told, we did about 4 miles, which, for both of our fitness levels, was good enough. 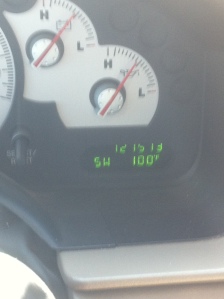 And so summer (and heat conditioning) begins.

One thought on “Functional Pony Roulette”