(These write-ups may be long, extensive, and photo-intensive.)
After what has been somewhat of a teeth-gnashingly stressful last couple of months, I was more than ready for a vacation and a chance to get away. Spending a week covered in dust, dirt, sweat, and horse hair, staying up for all hours, being short on sleep, and running around like a crazy person may not seem like most peoples’ idea of a relaxing vacation (laying out on the beach sipping cocktails is highly overrated…), but in my world, Tevis Week is pretty much the ultimate in vacation destinations. (One of the week’s catchphrases was “Insanity Confirmed!” and I think that pretty much covers it.)
This year, I would be crewing for Lucy, whom I crewed for in 2009 and 2012. She would once again be riding Fergus, the one she finished on in 2012.
The TUESDAY before Tevis, I managed a flight out of Phoenix at a rather civilized 8:30AM, which put me in Sacramento around 10:30. Kaity was already ensconced in Tevis Low Camp (our name for Lucy and Patrick’s place), and as Lucy was still at work, she volunteered for airport retrieval duty, since the faster I got there, the faster we could hit the trails. Part of Kaity’s trip involved bringing her younger endurance horse (Ani) for a couple of weeks of exposure and pre-riding of the Tevis trails to determine his future suitability for the ride, and Lucy once again offered me the use of Roo while I was up there.
I exited the airport a seething, spitting ball of rage (the flight and the airport were both filled with loud, seat-kicking children, and parents who should have known better, but the closer we got to Auburn, the more my Tevis Zen kicked in, and by the time we stopped for the obligatory In-N-Out burger (never mind both Kaity and I have In-N-Out in our respective locations…it’s just what you do in Auburn at Tevis time), I was fully in vacation mode.
A quick stop to Echo Valley Feed (I want to move to Auburn…not only do their feed stores know what endurance is, they stock endurance gear and give an AERC member discount [and Tevis shirts]!) for Fergus-food, a quick stop at Holiday Market in Cool (us girls needed liquid provisions for the next few days), and it was onwards to Tevis Low Camp!
Over the summer, Lucy and Patrick obtained Spike the Decker Terrier, who is a full, younger brother to my own Artemis. (Lucy is also the one who enabled my obtaining Artemis…payback!) I knew a week without my own puppy was going to be tough, so fortunately I had a stand-in! (Plus Finn, the 2-year-old Standard Poodle.) We did a whirlwind meet-n-greet of people and puppies, then donned riding gear, hitched up Kaity’s trailer, gathered gear, and headed out for the trails! (But not before Roo and I had to play our annual “catch me if you can” games.)
Tuesday’s ride would take us from the staging area called “the Bus Stop” through Potato Richardson’s place on the trail he made to connect to the Western States trail, down to Poverty Bar (where Tevis crosses the American River on Ride Day), along the river road towards Quarry, and then back the way we came. (Pretty sure there’s proper names for most of what we were riding, I just don’t know them.)
Even in the middle of a drought, there was still so much green and so much water! Lots of little creeks to cross, and some very fun, technical single track trails. Kaity is an excellent and fearless trail guide, so I happily let her lead while I hung on and kept Roo to a dull roar and off Ani’s tail. (I tend to have a rather conservative [ok, paranoid] definition of what is trottable and what isn’t, so it helps to have someone show me what exactly you can do and still not break your horse.)
We spent some time hanging out in a nice shallow section of the river, letting the boys drink. I marveled at the scenery. Kaity explained how the river crossing worked on Ride Day. We both took pics. (I think we both had our little point-n-shoot cameras glued to our hands all weekend.) Then we headed out of the river and down the river road towards the Lower Quarry check.
We didn’t go all the way to Quarry – probably about a mile and half out.
We started heading up the Brown’s Bar trail – supposedly the next intersection was less than a mile away, but we never did find it after going what was likely the appropriate distance, and were starting to lose daylight, so elected to turn around and head home the same way we went out. Brown’s Bar was really pretty – all green and lush, but unsettlingly eerie on that particular day, because it was dead quiet. No bird noises, no wind, no leaves rustling, the sound of the river didn’t reach that far up the canyon…a bit unnerving. (I may watch/read too much fantasy/supernatural/bordering on creepy stuff.)
Back down on the river road, Roo and I had our annual “discussion” – he does this leapy/twisty/crowhoppy thing, I yell at him, we proceed. Lather, rinse, repeat a time or two, then we’re good for the rest of the trip.
It was great fun bombing back up to Sliger Mine on some fairly narrow, twisting single-track…this is the kind of trail where I really love riding the short little go-kart ponies. They zoom.

We got back to the trailer right at dusk, spent a moment picking fresh blackberries around the trailhead, then headed back to Low Camp for pizza and an evening of staying up way too late (a recurring theme).

WEDNESDAY was our big ride day – Kaity and I trailered to the new Chicken Hawk staging area and rode out from there, backwards up the trail to the Deadwood vet check and back. The new staging area is very nice – both beforehand and on Ride Day. There’s a lot more space than what the old check used to have, from what I understand.
I got to see part of the trail back in 2009 when Lucy took me riding from Foresthill to El Dorado Creek and back, but my memory of it wasn’t all that clear, and I knew I had seen the easiest parts. Going down the Michigan Bluff side of El Dorado Canyon wasn’t bad. There’s a lot of trees and vegetation, and with exception of a couple of rock sections, pretty smooth.
Going up the Deadwood side made me squeak.
Because it’s a long climb up – about 3.5 miles – we were taking it easy and walking most of it. The Deadwood side of the canyon has more exposed areas, and going at a slow pace, even going uphill, gave me entirely too much time to think about the fact we were going to have to come down this same trail again. I will admit I was pretty unnerved by the time we reached the top – Insanity Confirmed, again, and who thought Tevis was a good idea anyway??? – and I chose to pretend the location of Deadwood Cemetery at the very top of the canyon was an unfortunate coincidence in placement, and not an ominous sign.
We continued on to the site of the actual Deadwood vet check – out of the canyon and on nice, trottable roads and trails now – and stopped for a quick lunch. There’s a pump (potable, we later found out!) and trough at the site, and the Ride Day port-a-potties were already in place. The boys had a drink, then got tied to the hitching posts while Kaity and I broke out sandwiches, ate, then took turns pumping water while the other dunked and soaked her head/hair.
40+ minutes later, we headed back down the trail. This was the part I was dreading…and it went so much better than I thought. A lot of the Deadwood side of El Dorado canyon is a fairly gentle downhill slope, easily trottable in many sections. So we trotted. Ironically, I did better trotting than walking. When trotting, I feel like I’m more actively engaged with how I’m riding, and I have more to think about and focus my attention on other than “look at that drop-off…”
If you are afraid of heights, I apologize in advance for this next series of pictures. You may wish to swim by them quickly if you have no desire to see some of the [potentially dumb] stuff I do on horseback. I apologize in advance to my mother.
Also, Kaity is braver than I am, which is why she had the camera out and I didn’t. 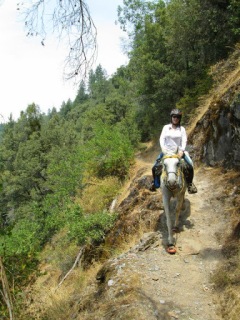 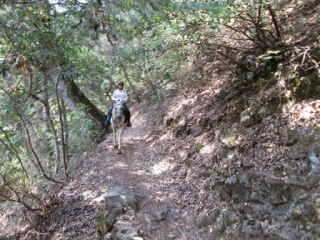 I had a couple of heart-seizing moments when Roo would trip on an embedded rock, but it was minor stuff that he easily recovered from and kept on trucking. And the cliff back up to Michigan Bluff wasn’t bad at all – I could handle the slower walking pace on it.
So the good news is, my nerves cope with the trail better when taking it the same direction The Ride goes, and not backwards. The other good news was I’m pretty sure half of my nerves were from being on a horse I still don’t know all that well. Granted, Roo knows the trails and has done the canyons multiple times…but I know I would have been more comfortable on my own pony that I know inside and out and trust on anything. So hopefully by the time I get to Tevis, it will be on a horse who I have already logged extensive riding hours and trail miles on and I will feel comfortable moving out and making time where I can.
Through Michigan Bluff and back to Chicken Hawk, we let the boys move out where we could, and they were flying! Roo got so mad at the fact Ani (at 16 hands) can easily out-trot him (in all of his 14.1 hand glory) and he was clearly pouting as he watched Ani roar away from him down the road. But we made up for it with pans of sloppy mash back at the trailer.
Wednesday evening is the Tevis BBQ, although by the time we got back, uploaded, cleaned up, and got to Auburn, things were pretty well wrapped up for the evening. I like the socializing, but I was really glad for the chance to get to see more of the trail. We did the traditional perusal of the barns, drooling over the gorgeous horses (nothing like a barnful of athletes in tip-top shape), then headed back to Low Camp for the night.
Part 2: Tevis Prep and The Ride to follow…

A #throwback to #PonyInHerPrime. 2009, the height of her endurance career, and adding more Arabian than the actual Arabian was...because there were kayaks. 😆🤣🙄🤦‍♀️ #skipmegold #ponyoftheamericas #endurance #endurancepony