In reading Funder’s blog post about her Nevada Derby 50 ride, she had a section where she talked about sled dog racing, lead dogs, and the similarities to that and endurance. She put into words pretty much exacty what I was thinking, so with her permission, I copy it here:

I spent a lot of time thinking about lead dogs.

This year I fell off into watching the Iditarod pretty closely, and I read two books about long-distance sled racing. It’s fascinating, really, the similarities and differences between endurance riding one horse and endurance racing 8-16 dogs. One of the main things sled racers worry about is their lead dogs. Not every dog has it in her to lead the pack, and only the best of the best can lead for a thousand miles straight. Most teams — even winning teams — rotate between several lead dogs. If your lead dog quits on you, he’s probably nottired, he’s just mentally tired from being in front, and he needs to just run with the pack in the middle for a couple (hundred) miles.

So that was perking along in the back of my mind all day. It’s hard to be the lead dog.When Dixie and I were leading, I noticed that I had to concentrate much harder to make damn sure I was on the right trail. Can I see a ribbon ahead? When’s the last time I saw one? How’s the footing ahead, should I slow us down, don’t forget to signal when you slow down! What do I remember about this section? Can we walk for a quarter mile and get to better trail, or is this a section where you trot ten feet and walk ten feet and trot again?

The horses are the same way. And they’re herbivores, not brave predators. The lead horse has to watch for rocks and pick her footing; the horses behind the lead horse just step exactly where the lead horse stepped. (You’ve seen this — you know that if the horse in front of you stumbles over a rock, there’s a 90% chance your horse is going to stumble over the same damn rock.) It’s hard to be the lead dog for a horse too!

And I kept that in mind all afternoon as we swapped out our lead dogs. They’d all recovered fine, they weren’t lame, and Dixie and Kody are both hundred-mile horses. They weren’t tired; they were tired of leading. I didn’t get mad at Dixie, and I didn’t fall into my usual “she’s just not cut out for this sport we should give up” pit of despair. She did really well and she was really honest!

I’ve also dabbled here and there with an interest in sled dog racing — enough to have several books on the subject, at least. And there’s nothing like reading about sled dog racing to make you feel good about your sanity level as an endurance rider.
To be honest, I’ve never had to put a lot of thought into the mental pressures of leading. Mimi is naturally a lead horse. She prefers to lead, getting sulky, spooky, pouty, and sometimes downright naughty when kept in the back for too long. (When riding with friends, about the time they hear me cussing behind them is when they know it’s time to let the pony lead.) She can also keep up with or out-pace all the horses we’ve ridden with, and is still overall one of the boldest, bravest horses I’ve ridden. (To be fair, she also has who-knows-how-many hours and miles of experience.) 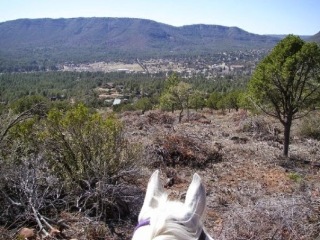 She’s also a pretty “easy” ride in the sense that the toughest thing to do is try to keep her to a dull roar and persuade her to not dislocate your shoulders. Especially at a ride, when she’s “on” she doesn’t even think about spooking or being naughty — she just wants to get down the trail, preferably faster than what I’d like her to do. But when the pony knows her job and does it, it’s pretty easy for me as a rider to do things like pay attention to the trail and ribbons. (Trail judgment…that’s a topic worthy of its own post…)

My pony has me so spoiled.

This past year, riding so many different horses showed me that this is kind of bold leadership is not par for the course. While it happened to varying degrees with a number of the horses I rode, I’m thinking specifically about Liberty.

I touched on it a bit in my Prescott Chaparral story, and again in the Bumble Bee write-up, but Liberty is a classic case of needing the mental break from leading. She’s still a young, green horse with not a whole ton of experience, and while she is naturally dominant in a herd, and has a curiosity, willingness, and boldness that will serve her well going down the trail, right now she still very much needs those mental breaks.

And riding horses who don’t have it quite “all together” yet has been more mentally taxing on me as a rider, including a couple of times at rides last year of missing ribbons/getting off course. Apparently I don’t multi-task as well as I thought…

It’s been an eye-opener for me to experience this, especially once I made the connection of what was actually going on versus the automatic assumption of “I broke my horse.” In all the rides we did, I only recall Mimi hitting a wall twice — once on a ride we’d done multiple times on trails we’d trained on, on a hot day, going away from camp yet again and she really just wanted to be done; and once when she tied up. I tend to hit mental walls more than she does, and it’s often the perky pony attitude that gets me out of my funk.

I also touched on this a bit when musing about heart rate monitors — that “mental wall” is part of why I do like to ride with one, especially on horses I don’t know as well. It helps tell me whether they truly are tired and it’s reflecting in their pulse, or if they’re just mentally tired.

I’m sure some of this is my “growing pains” of adapting to riding other horses. Like I said, the pony has me spoiled, and the faster I get used to the fact that not every horse is going to be another Mimi, the easier it’ll be on me. And fortunately, I’ve still got her to fall back on, when I need a confidence booster or don’t want the pressure of having to be so “on” as a rider the entire time. (Not to say I let my guard down with her…the times I have, it’s usually ended up in a parting of the ways…that pony moves fast.)

It’s certainly true horses are a lifetime of learning, and the more of them you’re around, the more they teach you. I know I’ve learned that my preference in horses is a bold, forward leader…I would rather have one I hold back a bit than one I have to constantly coax, cajole, and pedal. Obviously, there is going to be some degree of coaxing, cajoling, and pedaling on young horses while they’re figuring life out…and that’s okay. As long as they eventually turn into a bold, confident, reliable, trail-safe horse…I’m happy.