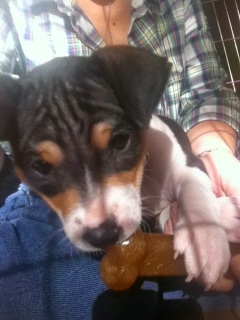 She’s an 8-week-old Decker Rat Terrier. She’s also officially my first dog. Yes, I’ve grown up with the family dogs since I was two years old, but this is the first one that’s mine that I picked out, bought, and am responsible for being her primary caregiver and turning her into a Good Dog. (No pressure.)

She’s young, and she’s a terrier, so that means she has two modes: Play Hard and Sleep Hard. But she’s also very smart, and although she’s dominant, she’s trying very hard to be a people-pleaser and likes being with me.

For only being here less than 48 hours, she’s settling in well. Our main deal right now is potty-training and crate training, with a side of “I don’t like this, get it off of me” collar introduction.

I eventually intend for her to, at the very least, become a ridecamp dog. Part of the reason I chose a Decker was for their size — small enough to be portable, but very tough for their size and the endurance to go all day long. If I can find a safe place to do so, I would like to eventually start taking her on some short rides, but that will be a ways off before I even have to think about that.

The breeder she came from is also an endurance rider (Global Endurance), so she’s already been exposed to horses, and she’s well-socialized with people and other dogs. So it’s just on me to continue that training, which we will as soon as she has her second round of shots at the end of the month.

Naturally, she has her own blog: Squirrel Patrol. But I’m sure some photos of her will crop up on ehre from time to time. :)

5 thoughts on “the newest "herd" member”