It’s amazing what can be found on half a roll of film that’s been living in a camera for two years. Several weeks ago, we had a family breakfast at my aunt’s house that consisted of Dad’s side of the family – his parents, sister, and brother and his family. As part of the gathering, we decided to do family portraits. Dad has the nicest camera of all of us, a beautiful Canon I-don’t-know-what-model-but-it’s-one-pro’s-use that I have designs on. A beautiful film camera. Yeah, they still exist (side note: and I still own one — my Canon Rebel is old-school film.)
All of this to say: there was still half a roll of film containing photos of who-knows-what when we went to take pictures. So half the roll was family stuff. The other half?
The last batch of pictures Dad took while crewing for me at Las Cienegas 2006. There were only a handful of the last of the pics — four (I think?) rolls over two days — he was a busy photographer! Unfortunately, I lost all of my copies I had on the computer in last fall’s computer crash, but I still have the original CDs, so all I have to do is upload them again. There’s enough pictures there for me to justify uploading a whole flickr or photobucket album, so look for that in the near future. As well as a recounting from the ride, since it was very fun — our first back-to-back 25s, and our first LD Top Ten — both days!
In the meantime, enjoy pictures of a very pissy pony. This was right before going out on the second loop out of camp on the second day. The wind was blowing at gale-force strength, it was cold, and she was not happy standing around. 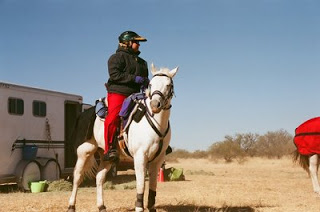 Definitely pissy. Note the rump rug and multiple rider layers. 5, I believe, the top layer being a Goretex shell and pants.

Slightly more cheerful. I think the wind stopped blowing for a microsecond.

Riding partner for the weekend, Cathy Gemperline and horse Diamond, who Mimi tolerated, since we were moving at at a pace fast enough to deter her from pulling too many ugly mare faces.