East fenceline – San Tan Trail – over Saddle Mtn – trotting road – San Tan Trail – Goldmine Trail – rocky hill road
8 miles, 3.4mph average moving
Hooray for Epics working for Beamer! About time we didn’t loose any boots. And we did a lot of trotting today, and rode the rockier trail in the park, the one we like to call the “Easyboot Eating” trail because invariably, someone would usually loose a boot. Not today! We did have to compromise and just tape plain Easyboots on his hind feet, cause the gaiters were rubbing at the area where he scraped himself at First of Spring. But they stayed on! And no rubbing on the front Epics.

Here’s Beamer being a sweetie to Dad. He is such a touchy-feely horse. Whenever he gets scared, all you have to do is touch him on the neck and he calms down. It’s been a rocky start, but I think we’re finally getting somewhere. He’s done 2 NATRC rides this far, with a 3rd one planned for a month from now. We’re planning his first 50 mile endurance ride for this summer, either hte Devil Dog 50 in Williams in July, or one of the days of the Bryce Canyon XP in September.
It was a really nice weekend to be out, overall. It’s starting to get warm – mid 90’s yesterday and today. But it’s still cooling down at night and is really nice early in the morning. The heat conditioning is important for the horses, and us, as well. A lot of the desert plants are blooming right now – hedgehog cactus, the last of the ocotillo, greasewood. Those are pretty, but par for the course. What I love about right now is the saguaros and ironwoods are starting to bloom! 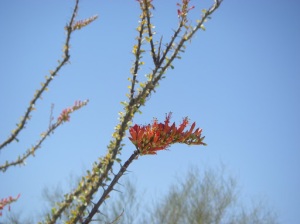 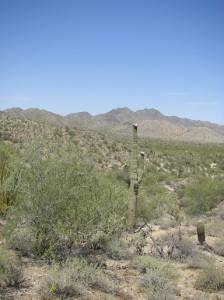 Mimi was really, really good today, too. She was such a pill yesterday, 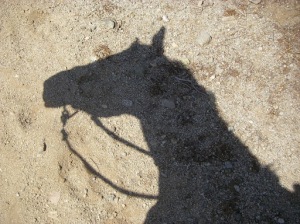 that today was a nice chance. She was kind of goofy early on when I hopped off to lead down the hill that goes over the saddle. It’s a nice single track that goes down, does a switchback, then goes down some more. Well, she decides that instead of walking down the trail, she’s going to climb on the pile of granite next to the trail. :) That really didn’t work so well, and she almost face-planted, something I haven’t seen her do in a while. Hopefully she learned her lesson about staying on the trail.

I finally remembered to get a picture of my new mascot: 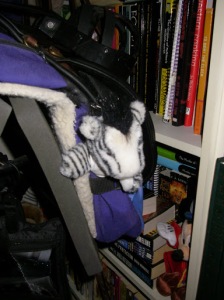 This little fellow has been living with me since the summer between my junior and senior year of high school. He was my companion at Arizona Girls State, one week of sheer political hell and way too much estrogen in enlosed spaces. You know you’ve gone crazy when you start talking to a stuffed animal.
So on a whim, I stuffed him into my bag to go to First of Spring. I had been closet cleaning and found him. Well, he’s been living in my pommel bag ever since. He doesn’t have a name yet, but as is readily apparent, he’s a long way off from the African safari!
I like to think this is also a way of honoring Merri Melde’s Raven, who is MIA somewhere in Brisbane, Australia right now. While I’ve never had to opportunity to meet the Raven (or Merri for that matter…maybe when she gets back from all her traveling!), I follow their blog adventures. Merri, may you someday get your traveling companion back!
Ride countdown: 4 weeks until Descanso, aka the NATRC Region 2 Cuyamaca Benefit Ride. This is my idea of how to spend a holiday weekend!