We’re currently sitting at a little over 7 miles along the Virtual Tevis trail, which means we’ve crossed under Highway 89 and are making our way into the Squaw Valley ski resort and up to High Camp. I loved the section from the start to the highway on the ride, and I really enjoyed seeing it is full daylight last year when I took my rider’s mare out for a pre-ride on Friday. 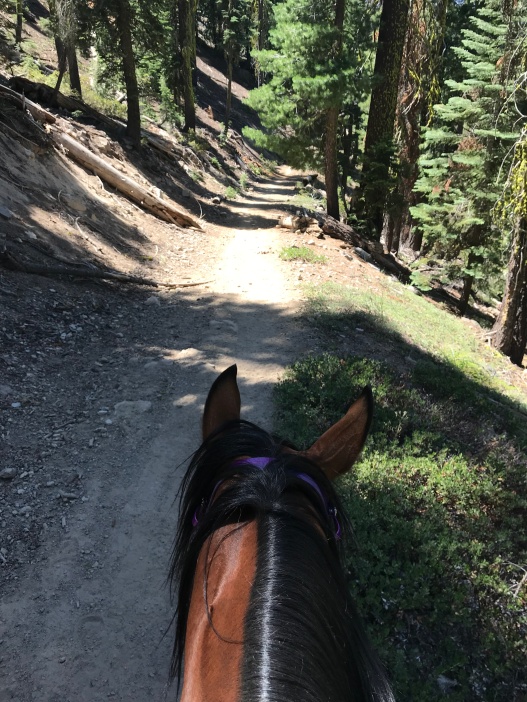 Just a little taste of what the area between the start and Hwy 89 looks like.

And for fun, a video of what the area of the highway crossing looks like. This is looking south, from the north edge of the bridge over the trail crossing. Riders come down the trail on the east side (at some points you can see them snaking their way down some switchbacks in the background), cross under the highway via a trail underpass, ride up alongside the bridge, make a sharp turn to ride northbound alongside the highway (there’s a concrete barricade between the trail and the highway), and then another turn off the road onto the trail. This is from 2018, the year I rode, and Roo and I show up at about the 1:30 point in the video — little grey Arabian in yellow tack, and I’ve got a grey shirt, black tights, and white helmet.

I tried to embed this, but the Facebook embedding code doesn’t want to play nice with my blog, so here’s the direct link for the public Tevis Cup Facebook page and subsequent video:

And a second video, this one from 2016, from the perspective at the south end of the bridge, watching riders come up from the underpass.

I’ve hung out and taken photos/videos at the Hwy 89 crossing twice before, and it’s a ton of fun. Timing is such that if you’re part of crew that needs to be at Robinson Flat, you can’t be at 89 and still make it to RF in time to catch the front-runners, but it’s a great place to hang out and get to see the entire field of entrants come through in a relatively short period of time. Everyone is still clustered together as this point, so it usually takes less than an hour to see everyone go by.

It’s currently 113* here in Phoenix, and I’m really missing my annual Tevis getaway now. Not only for the Tevis environment and social aspect and catching up with my tribe of like-minded Tevis obsessees, but also for the fact that for at least a day or two, it means a respite in weather and the higher-elevation cooler temperatures. (In fact, yours truly briefly appears in the second video as well, about 2 minutes in. The wild tangle of blondish curls and the multi-colored puffy jacket? Yep, that’s me and my very distinctive jacket.)

But even more than the weather, the socialization…I find myself craving the energy and unique sensation that only Tevis has. There’s a vibe there, the kind that gets under your skins, the kind that fuels hopes and dreams. It might be a long shot, or it might not. At this point, I have no clue, so I can’t help but dream big and find my motivation from the possibilities.

With Liberty, I’m finding that baby steps now are going to lead to incremental leaps in the future. This mare is so smart, and has such a huge try, that I feel like taking the time now to really lay this foundation and establish trust between each other will really pay off in the long run. Because she is also stubborn, dominant, and opinionated…but that’s okay, because I know how to work with that.

Funny realization I had…she and Flash remind me so much of each other. They both equine personality test as “rock stars,” and she would be the “queen” counterpart to his regal, slightly imperious “king” aspects. Initially I didn’t make the connection of similarities — it had been a couple of years since I had been around her when I started riding Flash, but having ridden him and spent time with him off and on over the past couple of years, the similarities really struck me this time around as I’ve been working with Liberty. And that knowledge has been super instrumental in leading to success with her, because it’s taught me to respect their opinions, and to stay very level and matter of fact, and not take their opinions and small acts of defiance or attitude personally or overreact to them, but still stay firm, and redirect or correct as necessary, but done in a way that isn’t emotionally charged or defensive. I know Flash made me a better horsewoman, and in turn, I find myself now transferring those same skills into Liberty. It’s calm, confident leadership that supports but extends trust to the horse.

Today’s nemesis was something in that corner by the evil trailers.

Today was a day that demanded some tact and patience. Liberty’s biggest issue is she can be balky. If there’s something she doesn’t like, she will stop, plant her hooves, and refuse to move. She’s gotten away with it, too, because she learned that rather than fight her, her rider preferred to just dismount and lead her if they were solo, or rely on a tow from the other horse if they were riding with people. I myself employed the “buddy tow” system when I’ve ridden her in the past, especially at rides, or found myself relying a little too much on the ability to smack her with a crop. And I just don’t want to have to rely on that in the long run. So I was rather pleased to have her balky side pop its head up sooner, rather than later, and give me the opportunity to work through it today.

Shagyas are known for having a stubborn streak, which can make them interesting characters to work with, especially when that’s on top of an already opinionated horse. But by my own genetic background, I’m half-Slavic, which means I’m just as stubborn as my mare, and I was determined that I would out-patience her.

Ultimately, we stood in that arena corner for almost 10 minutes, eking out one step at a time. I had a couple of simple guidelines: she couldn’t back up, and she couldn’t bolt or rush through. And by the end of that time, she had made her way up to the scary corner, given several good Arab snorts, and then finally, I felt her give a big breath and relax her whole back and body. From there, we proceeded to do another 10 minutes of solid walk work until I really felt her settle, and then from there, we were able to do almost 10 minutes of solid trot work. I also started asking her for a little “more” in her trot, not just the soft little dib-dib trot, and it turns out she’s got a very nice 8mph trot in there. Not only is this building her fitness, it’s building my comfort levels, as well as readjusting my own internal odometer to “normal horse pace” versus years of “pony pace.”

I was thrilled with how the session went today. Was she perfect? Nope. I don’t know her well enough to know if we’re still working the kinks out (very likely), she’s still getting into the habit of regular work (also likely), or something is not comfortable — still haven’t found a bit she likes, and I don’t know if she likes the Total Saddle Fit girth versus the mohair. Thing to keep experimenting with. But we worked through some hiccups, and I’m super-proud of how both of us handled it. I kept my patience and my cool, and most importantly, my confidence. And she worked through a major balky moment without becoming scared, or resentful. 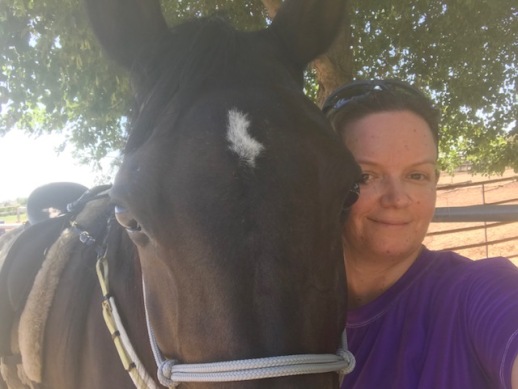 Definitely still talking to each other at the end.

When we finished, as I was untacking her back in the barn, that mare’s face was fascinating. I could see the wheels turning in her eyes as she was processing everything, and she stood for a solid five minutes licking and chewing and yawning. Some major releasing and processing happening. 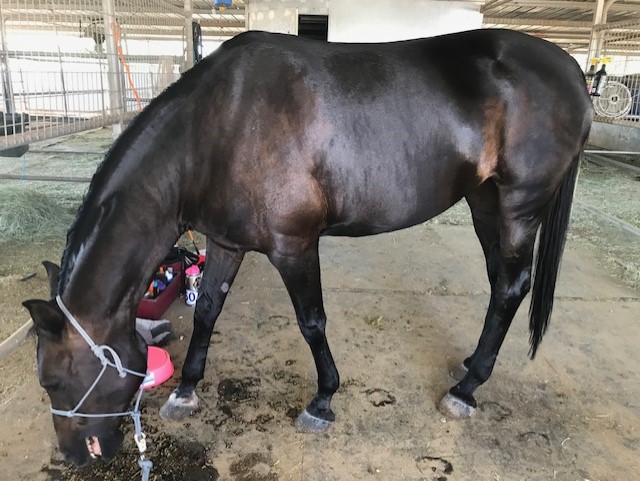 Post-shower, enjoying making a mess of her sloppy mash. She’s definitely getting more svelte, and I’m seeing some more muscle development. She’s also reverting to more of her true seal bay color that she’s usually been. Previously, I’ve never seen her as dark, almost black, as she was when I brought her home. Which was fine, she’s beautiful either way, but I do lean more towards the seal bay shading as my preference, just because it’s a little more contrast on her beautiful face. Guessing some of this is sweat/salt/sunfade…but she was in 24/7 unsheltered turnout up in Kingman, and they get plenty toasty up there, too.

On the pony front…

She received the talk about using your powers for good or evil at some point in her life. I now know which side she chose…

Fine, Mimi, I get it. No more fly sheets this year. Obviously making her exuberance over not having to wear clothes anymore known…

Destructive tendencies aside, Mimi is loving retirement life. As long as she gets first cookies, a cool shower when it’s hot, her itchy spots scratched, and the food supplied, she’s a happy camper, and seems to be rather content that I have something else to occupy my riding time and attention.