21 days to form a habit, or so the adage goes. Newer research suggests it can be anywhere from two weeks to eight months to form a new habit.

And how quickly do we lose them?

Right now, I feel like I’ve lost some of my habits. Somewhere along the way, I’ve fallen out of the habit of many things I used to do. Running. Writing. At this point, even riding. And once you fall out of the habit of doing something, and you look back on it, it makes you wonder, “How did I do that?”

How did I run a 50k ultramarathon three years ago, and now after 1/8th of a mile down the canal path, I’m gasping for breath? Sure, I can blame hurting my ankle back in December and it still not being 100% right, but the truth is, I fell off the fitness bandwagon last summer, and have yet to find sufficient motivation to climb back on it again. I need to — I’m out of shape, feel like a squishy marshmallow, and have some extra pounds that have decided to creep up on me that really need to go. I also need to get creative, since the gyms are all still closed, and part of why I stopped going last year was to save $$$ on membership costs. I did add 1/4-mile jog to the daily dog walk routine yesterday, and ugh. It’s like starting back at the beginning. But it’s something, right? 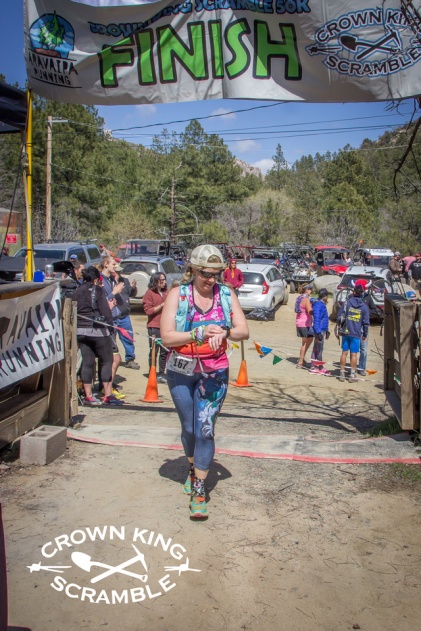 3 years (and about 20 pounds) ago. While I don’t have much desire to make a grab for the ultra-distances again, I did enjoy the cross-training I incorporated and want to get back to that.

General fitness work…that, I need to get creative, since gyms are closed and Amazon is currently out of stock of all free weights. I’ve started doing a “plank a day” and adding time every day…and my abs and core are laughing at me. Not for the first time do I wish people held fitness as well as horses do.

While backing up some computer files the other day, I got to browsing through and opening up some of my creative writing files. I used to creative write all the time, especially during college and my stint in court reporting school. Why write term papers when you can write creative fiction? I was in such a habit of it, I never realized how prolific I was. Of course, my major failing as a writer? I have a hard time actually finishing things. The vast majority of my writing projects are unfinished…some just need a chapter or two tacked on, others are half-started ideas. It’s always been for fun, not publication, an exercise for my creative brain cells, and often times, good therapy, since there’s no law about creating fictional representations of annoyances and subsequently beating the crap out of them on paper. 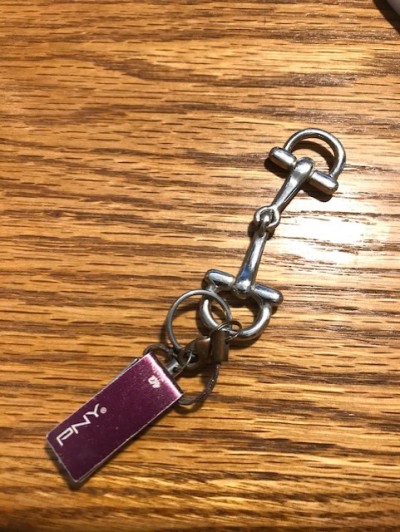 But while the ideas are still there in my head, and sometimes scribbled down in one of my never-ending ideas notebooks…I don’t remember the last time I sat down to a keyboard and a blank Word doc and actually wrote. (Creative fiction, not blogging or a work article/project.) And I find myself out of the habit. Words don’t come easily. Characters who once lived in my head feel like strangers. I get caught up on the minutiae and technicalities of writing versus just letting the story come. I feel self-conscious and self-judgmental. (Why??? If I have no intention of publishing, why can’t my brain just switch off and let me write for myself?) Or I can’t be bothered to try to put words on a page, because I have a story playing out in my head, and I can’t translate what’s visually playing out in my head as cleanly into words as I would like. So I let my writing habit fall by the wayside. Although I do still find myself scribbling down random ideas…so there’s still hope…

And riding. How do you admit that you’re out of the habit of the one thing that has been a constant in your life for the past 27 years? Or that you’re losing heart for the one habit that has pretty much defined your life? Obviously in the immediate here-and-now, with rides shut down and no signs of getting back to “normal” on the horizon any time soon, it’s of little to no consequence. But the future? I don’t know what the future holds.

This has been another slow, downward spiral. It started last year after Flash got hurt. I wasn’t there, I had nothing to do with it…but having my favorite horse taken out of commission really knocked the wind out of my sails. Maybe it was dumb on my part to get so attached to a catch ride horse who isn’t mine, but my heart doesn’t always obey logic, and I connected and bonded with that horse from the first moment I interacted with him. He raised the bar to a whole new level for me, where it isn’t even fair to the other horses I’ve catch ridden to try to compare. Even though I’ve ridden him fewer than a dozen times all told, he changed the face of endurance for me. 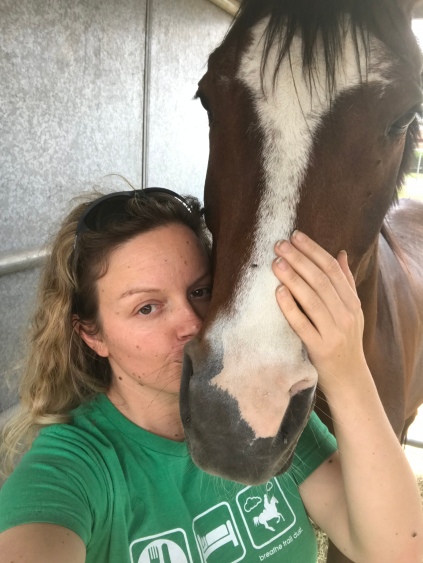 It’s been a year since he got hurt, and was at the vet clinic only 2 miles away from me for a couple weeks as part of his recovery time. I loved my daily visits with him, and how much he loves smooches and selfies.

The inglorious end to my winter 100-mile plans struck another blow. Not only was it yet another case of plans going awry, this time I also felt like a major failure. Pretty sure part of the deal of catch-riding your friend’s pony doesn’t entail breaking your friend’s pony. :/ Was it a pre-existing situation and something he had brewing for a while? Yes, most likely. But whatever the case, it was ultimately caught up to him on my watch, which still makes me feel guilty, and I can’t help but armchair quarterback myself and wonder what I missed along the way, where I went wrong, what could I have done different. I had been feeling pretty dang good about the whole endurance thing, felt like I had finally grasped the elusive art of pacing, was getting my ducks in a row, might actually have a shot at cracking my 1,000 endurance miles milestone…ah, nope.

Since then, I’ve made no real attempts to try to ride. Excitement flared briefly after winning a raffle entry to the Barefoot in NM ride, and the offer of the ride manager’s super-experienced horse to take me through…but that ride was supposed to happen in April, which it obviously didn’t.

And finally, even almost-27-yr-old Mimi decided to get in on the “fun.” Sometime back in March, probably when I was gone at Convention, she whacked a front leg on something. Who knows what. Wouldn’t be the first time. End of March, I noticed a hard lump on the outside of her right front leg that she was flinchy to hard palpation on, and was off at the trot under saddle and in-hand. 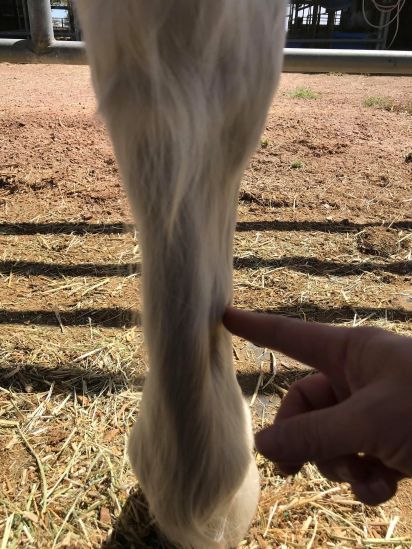 That wasn’t there before…

The area corresponded roughly to where the splint bones are, but I wasn’t sure if they went down quite that low. Fortunately the vet was scheduled to be out for spring shots within the following days, and she took at look at it, declared it to be a “remodeling splint” that wasn’t impinging on any ligaments or tendon area, and that it would just take time.

So I’ve done one 5-minute bareback meander on her for the past two months. Last weekend, we took a couple-mile hand walk around the barn neighborhood, where she proceeded to still be an utterly hilarious pain-in-the-butt who still thinks she can drag me around like the pipsqueak 11-yr-old I used to be. Spoiler alert: She can’t since I now have the power of height, weight, the correct application of physics and leverage, and most importantly, a rope halter, to my benefit. But it’s still funny to see her try, and her sassiness and attitude makes my heart happy. She owes me nothing, and has well-earned a life of ultimately being a happy pasture pony if that’s what she needs. 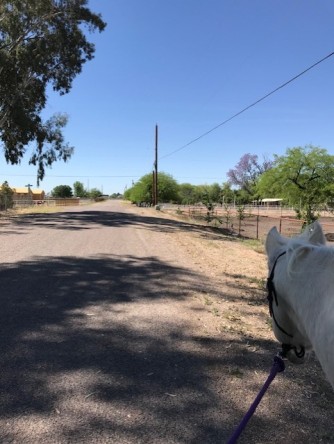 Doing walkabout around the barn neighborhood 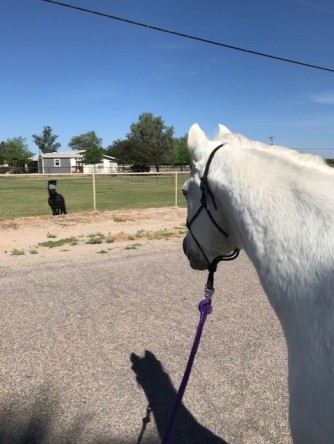 Mini horse across the street is *fascinating*

She’s also happily trashing fly sheets, since we are two weeks into the season with this year’s sheet and it’s already looking tattered. This doesn’t bode well for its survival for the entirety of the summer. I think I will start a betting pool for how long it actually lasts… 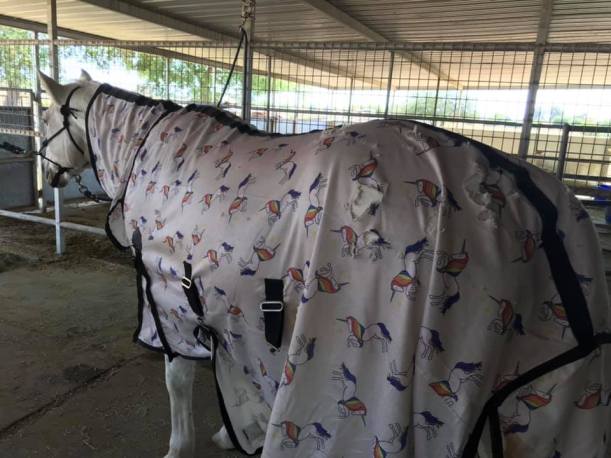 Combine all of that, though, and I’m just not feeling all that motivated at the moment to seek out saddle time. Which is a bit weird when so much of my life has revolved around and been defined by horses for so many years. I don’t know. Maybe I’m just feeling a bit burned out. Or at least tired of trying so hard and fighting so hard and feeling like I’m getting nowhere. I’ve said it before, but it bears repeating: Horses, and endurance, are not for the faint of heart.

On the flip side, there is one habit I’ve apparently picked up: my succulent habit. I’ve added “a few” new additions since my post on the subject last month, and I’m a wee bit obsessed with tending my plant babies right now. Which is really ironic, because succulents tend to thrive on benign neglect, so they’re probably feeling a bit suffocated with me hovering around, waiting for them to dry out and show signs of “water, please!” (Pretty sure I’ve killed my past batches with love via over-watering, so to that end, I now have a moisture probe, an the watering bottle doesn’t come out until that needle is hard-pegged on “dry” and the plants are looking wrinkly.) The biggest challenge will be getting them through the hot summer months, especially as the evenings heat up, and I have way too many of them to bring them inside the air conditioning. I may have to get creative with ice packs… 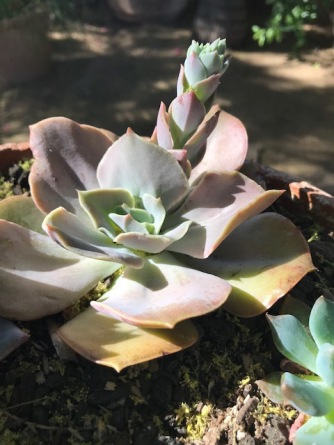 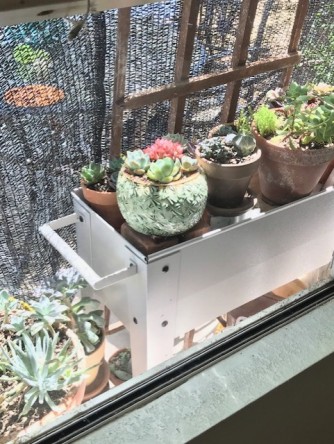 I know what I’m feeling right now is a rough patch, the culmination of things that have been building over time and finally coming to a head, in a time when everything is weird. This isn’t the first time my motivation has ebbed or that I’ve found myself frustrated and asking “why?” in regards to my equine sport of choice. I also tend to fling myself at projects, ideas, and tasks with a bit of wild abandon, putting a lot of time and energy, both physical and emotional, into them (see: “How many plants can Ashley buy in the span of three months?”), so it doesn’t entirely surprise me that eventually I would start feeling some effects of burnout along the way.

Right now, I don’t have any answers, just the thoughts that were swirling around in my head during this morning’s walk. But I do have plant seeds in the mail and on their way to me…after managing to sprout three adenium and a dozen lithops, I’ve decided to try my hand at raising echeveria from seeds. Because apparently my brain still needs a project, even if it’s not one of my “usual” habits.