Here we are, at the end of February, and I find myself running out of days to squish in a post to stick to my “at least one post a month” streak that been going now for seven and a half years. That’s pretty much unheard of for me, who often has the attention span of a gnat, and difficulty seeing ideas and projects through to completion. (Ask me how many half-finished craft/creative projects I have sitting around. Better yet, don’t.)

It’s not that I don’t have anything going on — I’ve got plenty keeping me busy right now. I just don’t know how much of it is considered interesting, blog-able content. I’ve crafted this blog around my endurance shenanigans, and right now, those seem to be few and unpredictable. That said, having a ride season that, only three months into it, has already run me through the gamut of emotions, was enough to finally galvanize me into action towards making some changes and additions in my life.

This whole week, I am participating in a 5-day Advanced clinic on the Masterson massage method, and intend to finish this year what I started last summer with that first two-day intro clinic — getting my full practitioner certification in the Masterson Method.

Not only is it something I really enjoy doing, but it’s a way of working with horses that doesn’t involve training, or vetmed (both things I’ve considered in the past and ultimately rejected). I hesitate to say it out loud and jinx myself, but I feel like I might have actually found that niche for myself that I’ve been searching for. Not only that, but my aim is to have it be enough of a financial boost once I get going with it that it allows me to once again pick up endurance under my own power (and ponies).

So we’ll see. That’s pretty much the biggest thing on my plate right now. I’ve had some good times this past month — I’ve gotten Mimi out on trail a couple more times (which is a couple more times than last year, huzzah!), but mostly she’s enjoying being my Masterson practice pony; I’ve had a couple of days of going up to the Scottsdale Arabian Horse Show and hanging out with friends; it’s rained quite a bit (which is much more like the typical rainy February that I can remember growing up); and I’m doing my typical scurry around to get ready for the AERC Convention the early part of next month.

So with that, a few photos from a ride around the neighborhood last weekend, before I scuttle of for another clinic day. 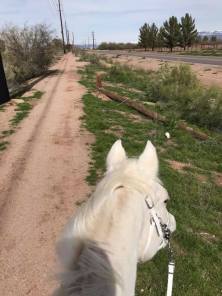 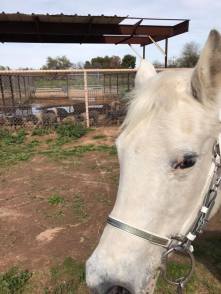 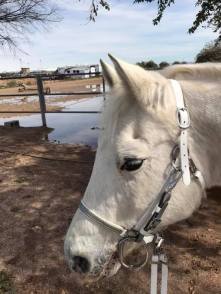 One thought on “February”