Starting the new year off right, seeing the trails between my favorite set of pony ears.

We were originally slated for a traditional “start as you mean to continue” day on New Year’s Day itself, with a ride out at Picketpost Mountain…but a cold/storm front moved in, and even dumped snow on the outer parts of the Valley. So the ride got postponed to the weekend, and I spent my New Year’s day in “Closet Purgeatory.” I’m not sure if that means I’m going to spend the rest of my year cleaning, sorting, and organizing things?

Anyway, postponing it resulted in an absolutely perfect day for riding, with the kind of weather that reminds me of why Arizona in the winter is such an ideal place. Highs in the lower 60s, breezy, a few scattered clouds…ideal weather for the older, sometimes-crunchy pony.

Not that she was feeling particularly crunchy this time. I think I shocked her with another outing so soon after our Christmas ride, and when we ended up going to a destination she hadn’t been to in almost 8 years, I’m pretty sure she aged down by a decade or so out of sheer delight. The last time we were at Picketpost, we were still in endurance training mode, and I’m pretty sure she thought the same thing was still true this time around. 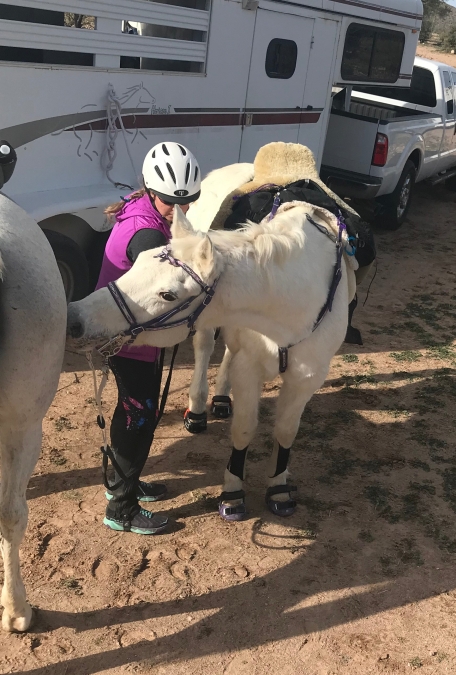 Little stinker being sassy with her pasturemate Tuudy, whom she has merrily lorded over and bossed around for the last dozen years or so.

Picketpost Mountain is a trailhead in the Superstition Mountains, out near the mining town of Superior. It’s an access point for The Arizona Trail, and that’s one of the main features of the trailhead, but there are miles of other trails that connect or branch off from that point. I’ve ridden and hiked parts of The AZ Trail from there, but this time, we would be exploring one of the side trails — brand new to both of us! 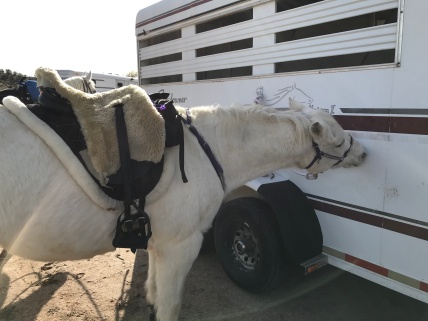 All dressed and looking snazzy. She’s still so stinking cute in her endurance gear. 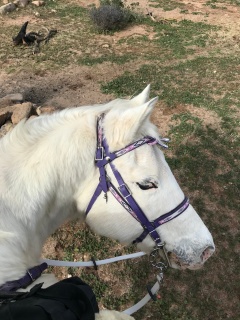 “Let’s gooooooo…” Waiting for the rest of the group.

A group of seven of us would be riding together, and while the entirely of the trail can be ridden as a 10-mile loop that eventually goes the entire way around Picketpost Mtn, we opted for an out-and-back option…ride out for a few miles, stop for lunch, then head back.

Picketpost Mtn and The AZ Trail

I don’t actually know if the trail itself has a name…it winds through what appears to be called Arnett Canyon on the maps, so that’s what I’m calling it, if only for the purposes of my own identification.

Like the vast majority of the Superstitions, it has rocky parts…some slab type of stuff that is either flat or somewhat stair-steppy, some dry washbeds, some typical embedded rocks in the trail. But there were also some sections that were smooth, gorgeous singletrack that both of us itching to go blasting down the trail.

Bonus of riding with other people…I finally get media of me riding my own pony! And proof that I really need to work on my collapsing right ribcage habit.

During out Christmas ride, I wondered if that was going to be our “new normal” — while she was willing and happy to go, she also felt stiff, very heavy on the forehead, minced her way along on downhills, and had more than a few stumbles…all things that had me second-guessing if I had any business taking her out on trail anymore.

No second-guessing this time around. Main difference? Switched saddles. I had been using the Sommer Oakfield the previous ride, and I think I finally have to come to the conclusion that it’s too narrow for her, and she really wasn’t comfortable. This time, I used the Frank Baines dressage saddle, and she was moving out and doing her endurance pony power walk. No hesitation, no tripping, very balanced…and color me totally shocked that I’m pretty sure it’s actually the most comfortable saddle I own for me. 8 mile ride, totally at a walk, and I wasn’t sore at all…whereas 5 miles at a walk in the Sommer actually left me feeling it in my legs a bit.

I can also actually mount from the ground in this saddle. Every other one, I end up rolling on her…in all of her not-quite-14hh-glory. So not exactly a huge stretch and hang time to get up there. But this one stays put. Good thing, too, since I had to test that a couple times after she pitched a couple boots along the way. Time for some troubleshooting, since it’s been ages since she’s flung a boot. I suspect I need to bring her toes back some more, and the combo of that + water + mud was just too much. Eh, well…nothing like putting one’s own work knowledge to the test. 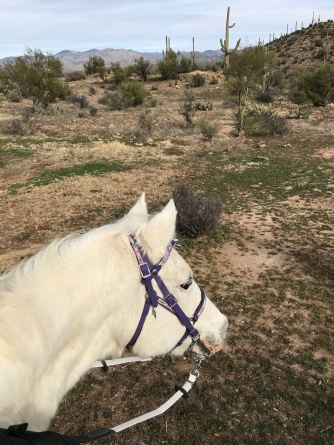 SO happy to be out again.

Water crossings! We’ve had enough rain recently that there were parts of the wash we crossed that actually had running water in it.

It was an absolutely beautiful trail, though, and really fun to explore an area I had not been to. It’s really quiet back in there, and although the trail is well-maintained, I think it’s not as well known, or gets passed over in favor of The AZ Trail. Which is fine by me, because it felt like we had the entire canyon just to our group. It’s a hidden oasis, tucked into the shadow of Picketpost Mtn, and has that wild, untamed feel that, to me, defines the Superstition Mountains and makes them so unique.

I’ll leave you with a bit of history — that strip of pavement is part of the original US-60 highway. The trail is about 1/2-mile from the current highway at this point, as the crow flies.