It’s alliterated, although I couldn’t bring myself to do “Phall Photos” or “Fall Fotos” without my inner grammar geek dying a little bit inside.

I know it’s only partway through fall (or what passes for “fall” in Arizona), but the past month has just been jammed full of a bunch of random stuff that’s kind of easier to just lump into one post. (Some of this stuff is over on Instagram as well, which is my go-to for quick, random updates and pics.) 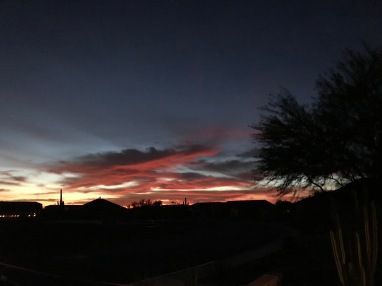 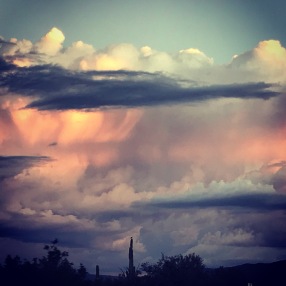 This fall season has been incredibly busy for my dad in his carpet cleaning business, to where there’s not enough days in the week/hours in the day to necessarily get some of the jobs that were coming in all taken care of, so I offered up my weekends to go out in the field with him and help get some of the time-sensitive jobs taken care of. I love the extra income, it’s a good physical workout, and there’s something very gratifying about the power to turn filthy floors into something presentable.

There have been several times now in the last several weeks we’ve been out both really early in the morning and late into the evening, so I’ve gotten some phenomenal views of the desert sunrises and sunsets. 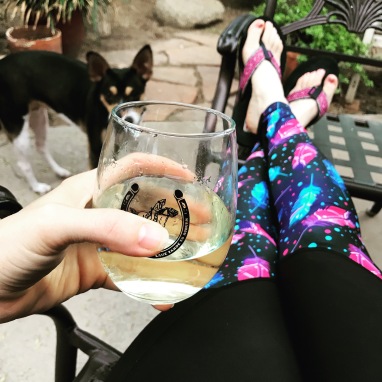 Cavaliere Couture, Ride Boldly, and Performaride have all benefited from my business lately. The CC’s are filling the need for plain black tights — and I love that she’s a small, AZ-based business. Still haven’t put them through the long ride test, but they’re insanely comfortable for just hanging around the house. The feather prints above are Performarides and as soon as I saw that pattern, I did flaily, “must-have” grabby-hands, because I love all things feathers, plus the purple and pink. And the newest RB’s that are on their way to me? Four words…”Christmas-colors leopard print.” These are going to demand an epic Christmas pony photo. (And Riding Warehouse has some hilarious equine Christmas accessories like hats, leg wraps, rein covers, quarter sheets…and this antler hat. Mimi is going to kill me.) 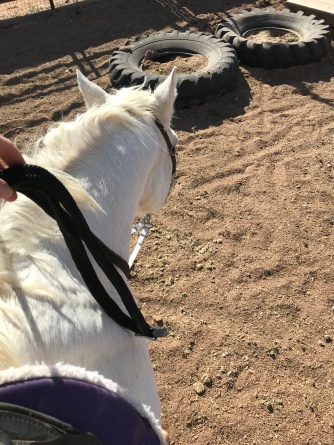 The only bad thing about being so busy was pony time suffered…which I feel bad about. Although I honestly don’t know if she really minds, one way or the other, anymore…I think she’s perfectly content to tootle around a couple times a month and otherwise live the retired life of luxury.

But yesterday I got to do barn catch-up and pony playtime. I just got new biothane straps made for a vosal I had laying around (one of my insane tack deal steals) — the original straps were leather that had gotten very dry and cracked, and I wasn’t comfortable using it in that condition, so had Amanda at Taylored Tack work me up some replacement straps.

Mimi was originally bosal trained way back when as a youngster, but that quickly went by the wayside after she came home with me and we promptly realized my pint-size personage was much better off with using a bit on her. The vosal is more of a mechanical take on the bosal, but she worked very well in it — I was able to ride on a pretty loose rein and more leg, and she was very responsive. (Granted, she was also not in Fire Breathing Dragon Mode.)

We’re both bored with working in the arena, so I took her out to stroll along the streets around the barn. One of the streets has a huge dirt shoulder that parallels one of the small irrigation canals, and that’s one of our go-to routes. The whole Phoenix valley has an excellent system of irrigation ditches and canals, most of which have paths that serve as “trails” of sorts, so I’ve spent my life riding alongside these canals and ditches. Most of the time, the small ditches are dry, unless irrigation is actively being diverted to properties, but occasionally around the house when I’m out with the dogs, I will manage to catch the initial irrigation release and watch it rush down the dry canal.

Well, this weekend, for the first time ever, my ride ended up coinciding with an irrigation release. I wasn’t sure how it was going to go — many horses have issues with water rushing at them (such as waves on the beach) — and Mimi has never been to the beach or seen water moving at her in that kind of fashion. As it turns out, she was absolutely fascinated. She stopped and just stared at the water, watching as it moved past up, and then continued to watch as the water level in the canal slowly rose. She was so curious, in fact she wanted to keep moving closer, and I was afraid she was going to do a tail-over-teakettle move in an effort to get even closer to the low ditch.

So they can be 25 years old and still have new life experiences. 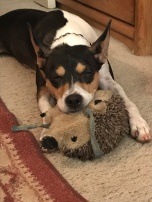 The girlies are excellent. Fall is my “gotcha season” apparently, since Mimi, Artemis, and Sofie all came into my life in Oct/Nov. And both Artemis and Sofie have fall birthdays (Sept and Oct, respectively). So things get a little busy around here, trying to keep track of all the relevant dates, and I finally gave up and put them in as annual holidays on my Google calendar.

As the weather cools down, our daily walk/run mileage increases, which makes for very happy terriers. The activity on the canal behind the house also increases, which means they spend quite a bit of time running in the backyard, taking care of their house and yard. Yay for self-exercising. 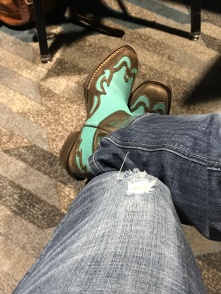 I went up to Reno a couple of weekends ago for the PHCP conference as a trade show vendor for work. Nice thing about this particular conference was the trade show only ran for specified hours of the day, to allow the vendors to attend the seminars. I really enjoyed the very specific audience, and being able to engage at that technical of a level of discussion in terms of boots, performance, hooves, and barefoot horses.

Yes, those are pink/purple/blue boots. No, they are not on the website. Yes, you can order them. They’re a special order — size has to be verified first, either by dealer fitting, previous ordered size/existing customer, or photos sent in for size evaluation. They’re going to be limited stock at least for right now, and made to order, so expect 7-10 day turnaround time before shipping. I’ve been using the pink and purple on Mimi this summer and I love them.

Reno in the fall was beautiful. I hadn’t realized there were so many trees in Reno proper, having only been there in late winter/early spring when there’s often still snow on the mountains and nothing growing. I got a small taste of fall and changing leaves, and the hotel was right along the Truckee River and the riverwalk. The hotel was also super-nice, with no smoking and no casino on the premises, so I didn’t come home with my usual post-Reno need to fumigate myself and all my belongings.

Okay, I kind of buried the lead on that one. I’m running for the position of AERC Director-At-Large this year. I love this sport, and want to give back to it, and also would like to try to have some kind of input as to the direction it is taking. This isn’t the same sport I joined 14 years ago, and I haven’t been thrilled with some of what I’ve been seeing in the more recent past. Ballots are due in to the counting office by Nov 30, and results announced in the January ‘Endurance News.’ It’s been interesting, and campaigning has been a good experience thus far. At the very least, I have learned a ton, both about myself as well as the organization, and made some new connections along the way. 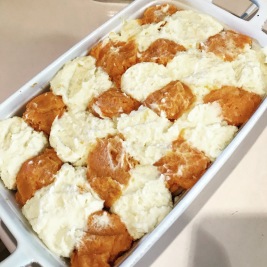 I’ve been doing more cooking recently, or chipping in on “joint-effort” meals. These “checkerboard potatoes” were my answer to what to do when you have a tub of leftover mashed potatoes and a tub of leftover mashed sweet potatoes, but not enough of each to be individual sides. Scoop in checkerboard pattern into casserole dish, pop in oven @ 375* (I think) for about 30 mins, and they come out with a lovely crispy top.

One of my cousins got married in early October. The wedding was at a winery (two words: ‘open bar’) with cocktail attire as the dress code. Ummm…pretty sure I’ve never owned a cocktail dress in my life. But I do now, and my plan is to take it to the AERC Convention in March for the awards dinner night and find out exactly how many single, available guys under the age of 40 are actually in endurance. ;)))

And finally, I’m growing a plant. It’s one of those almost-impossible-to-kill air fern thingies that I got on a whim at Trader Joe’s at the beginning of October. I mostly wanted it for the cool skull, but 5 weeks later, “Yorrick” (y’know, Shakespeare? Hamlet? “Alas, poor Yorrick…” as a nod to my poor history of plant-keeping and the fact I was likely to be left with a plantless skull in short order) is still going strong and growing.

Okay, so, that’s that, I think. The McDowell ride is this weekend, and I’ll be up there volunteering. On Friday, I offered to serve as the “new rider concierge” during check-in, an idea that percolated after a discussion on new riders at rides, and how, from a new rider perspective, it can be a very difficult sport to break into — “cliquey” being the exact term used — or not knowing who to go to with questions, and not wanting to take up the time of the busy ride manager/secretary with a line of people all wanting to register. So my purpose will be to hang around and be available for anyone who wants to ask questions.

One thought on “Fall Photos”