So, it’s been an interesting winter/spring. I don’t know if the fact I still keep attempting to lay out plans, both long and short-term, despite the “plans never survive first contact with reality” adage that is an all-too-frequent reality, is persistence and stubbornness, or bordering on futility.

Running events actually went pretty close to plan, albeit with some major “not according to plan” weather interruptions. You know you’re in Arizona when, in the space of two months, the weather goes from hypothermia to heat stroke.

“but it hardly ever rains in the desert…”

I’m very pleased with how my running season went this time around. No major injuries, and conquering Crown King/getting that first 50k completion. My two major goals, and I managed both of them.

What I’m finding very interesting is the aftermath.

Trail running is definitely not my all-encompassing joy and passion the way riding is. I don’t actually like to train for running. I get a lot of satisfaction out of finishing a race, and I enjoy the social aspect, but I have a hard time mustering up a ton of enthusiasm for the idea of going out for a long training run by myself. For me, it tends to be more of a “put in the work or you’re not going to enjoy the outcome” type of mentality when it comes to training.

After giving it some thought, I don’t know if the idea of moving beyond the 50k distance really holds a ton of appeal. The idea of having to do way more training above and beyond what I did for CK has very little appeal. Maybe if I had easier access to trails, I would feel differently, but as it is now, it’s a lot of work for me to get to actual trails, and takes a lot of time. Because I do have to drive everywhere (to the barn, to trails), that alone eats into the time allotted for my “play time.” And there are other things in my life that mean more to me than running/moving up in ultra distances.

(However, as long as I have the dogs, I will always be doing some degree of running, because that’s the fastest way to happy terriers.)

Comparing that to riding, there’s been very few times where I haven’t felt like riding. Especially if I’m on a good horse that I really like, the training and conditioning doesn’t feel like a chore or something that “has” to be done. It’s something I truly enjoy. (I always keep in mind Julie Suhr’s advice that “If you don’t enjoy the conditioning process, this is not the sport for you.”)

And it’s a good thing, too, since that tends to be the area in which all attempts at planning completely fall apart. If I didn’t love it so much, this would probably be an exercise in frustration/futility.

To whit: I was supposed to ride Liberty at the Bumble Bee ride two weekends ago. (Normally scheduled for January, but massive amounts of rain pushed it into April.) However, vehicle problems (NOT mine this time) prevented her from making it to the ride. I swear this ride is jinxed for me. Not once have I actually ridden it and finished.

So, since I was already there, with all my stuff, I begged a bed off of friends for the night, and volunteered on ride day. 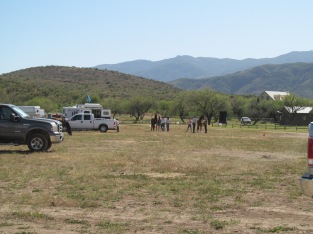 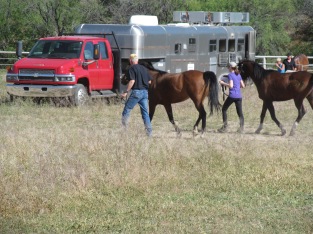 Not what I had planned, but I still had a good time, and felt right at home again with my endurance tribe. I once again landed my “master timer” job, which, aside from vet scribing, is one of the things I really like doing. I’m very organized, so the “keeping track of things” element of it is right up my alley, and apparently I can be quite bossy/direct when it comes to making sure the process runs smoothly.

Meanwhile, with the weather warming up, the pony is quite happy. Winter coat is shed out and she’s working on baldifying herself for the summer. Warm weather also = explosive hoof growth, so never mind that I trimmed her three weeks ago…by the time I got down to the barn this past weekend, it looked like eight weeks had gone by. 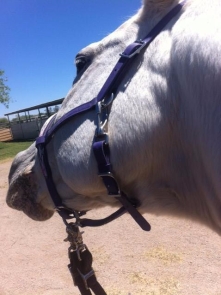 So that was a happy couple of hours spent meticulously working on her feet that had really gotten away from me this winter/early spring. Still not 100% where I like to see them, but since the goal is not “lame the pony from a crappy trim,” I’ll keep working at it over the next few weeks. She’s gone from “let me grow stupid-high upright feet and heel” to “let me show you how long my toes can get.” Pony feet = never boring.

And then we rode. God bless my sainted pony for putting up with me while I’m caught in this “ugh, I feel like a hot mess who doesn’t know how to ride” cycle. Apparently 24 years of riding, over 10 of which involved lessons, showing, and instruction, means nothing to my psyche right now, since I’m overthinking and just trying way too hard. However, I had a revelation on Saturday that somewhere along the way I completely forgot I had lower legs, and have been doing way too much upper leg and letting the lower leg just gleefully swing along for the ride.

And I wonder why I tip forward, or most of my ride photos have my lower leg trailing along somewhere back at my horse’s flank. Apparently the idea of the lower leg as your stable base of support isn’t just some radical suggestion.

In unfortunate other news, fire season already started here with the Sawmill Fire burning approximately 47,000 acres north of Sonoita, including part of the Empire Ranch, base camp to the Old Pueblo ride, and part of the Arizona Trail on the west side of the highway (which is a major section of trail for one of the ride days, and my favorite trail for the ride). 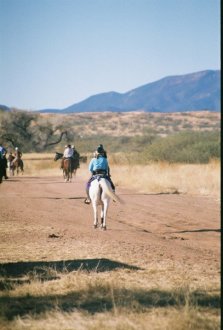 leaving base camp on the Empire Ranch air strip

on the AZ Trail

It’s too soon to tell how it will impact the ride. The 2017 ride happened already (March), but I don’t know what will happen for 2018. The fire is at 94% containment right now.

Much closer to home is the Cactus Fire, right along the Salt River…one of my go-to trail locations. 800 acres and 85% containment, but only about 4 miles away from some large residential areas of northeast Mesa. It’s also one of the spots where the Salt River wild horses like to hang out; fortunately it appears that none of the wild horses have been hurt or killed and they are staying clear of the area.

The weather has been hot, dry, and windy for the past week, so decidedly not helpful in fire control. Southern AZ in particular gets very windy; enough so that they had to ground air support several times due to high winds.

Hoping and praying for some spring rain, or early monsoons…all of the lush greenery from the winter rains has turned dry, brown, and crunchy, and we’re currently sitting at “tinderbox” status right now. :/

2 thoughts on “May Day Musings”