So that’s what it feels like to have a race go really well. :) Bear with me, this’ll probably be kind of sporadic and all over the place as I attempt to sort through various thoughts and takeaways.

I ran the Aravaipa Running Elephant Mountain 22k (which really GPS’d at 14 miles…the “Aravaipa miles” phenomenon, aka “free bonus miles”, was alive and well as usual) on Saturday, and for probably the first time ever, felt like I actually had it together and ran a properly planned and executed race.

I did the 35k here two years ago…I still haven’t done a write-up from that race because it was such a trainwreck and I felt so demoralized (probably should, just for the learning experience, eh?). I had been toying with the idea, off-and-on, about which distance to sign up for, and after some advice from friends, decided to stick with the 22k, which I *knew* I could comfortably do, and push myself to see what I could do within that distance, versus really stretching and scraping bottom for a repeat of the strugglefest that would be the 35k.

Elephant Mountain is held at the Cave Creek Regional Park, which is the north side of the Phoenix valley…about an hour+ drive for me, but I was able to carpool with a couple of local running buddies, which made for a much more entertaining drive there and back.

So Cave Creek is beautiful…but holy cow, it is rugged. It is rocks on top of embedded rocks, and with the rain we’ve gotten this winter, the rocks have been breeding. So what might look like a nice stretch of runnable trail at first glance actually turns into an ankle-twisting, toe-grabbing, rock-avoidance dance that tests one’s technical skills.

The hardest part of this race for me is the start — you’ve got about 1/4-mile or so on pavement, slowly heading uphill, and then you hit this climb, about 500′ in about a mile, lots of switchbacks and steady hiking, interspersed with flat sections you can run. Well, it takes me a good 2 miles in any race to really warm up, breathing-wise, so this is a bit of a rude awakening. But it’s also a good way for me to work on my power-hiking skills, and every climb was met with the mental approach of “good training for Crown King.”

From the top, it’s then a downhill cruise for the next couple of miles to the first aid station. I darted in, grabbed a couple dates and piece of bean roll-up, and darted back out, munching as I went. Technical trail = if you’re going to be walking anyway, it’s a good time to eat.

One of my main goals (aside from the perpetual “finish, preferably without looking like road kill”) was to really focus on nutrition. I am notorious for not eating enough, or frequently enough, when I’m running, and I’ve learned I cannot run in a calorie-deficit state for long. While I try to function that way on a day-to-day basis, and for my workout program (try to burn off more than what I put in), I cannot run that way without bonking, and bonking hard. My race strategy was to eat something every 30-45 minutes, and it worked really well…the only time the wheels started coming off was in the last 2 miles, where I should have nibbled on something a little earlier than I did. 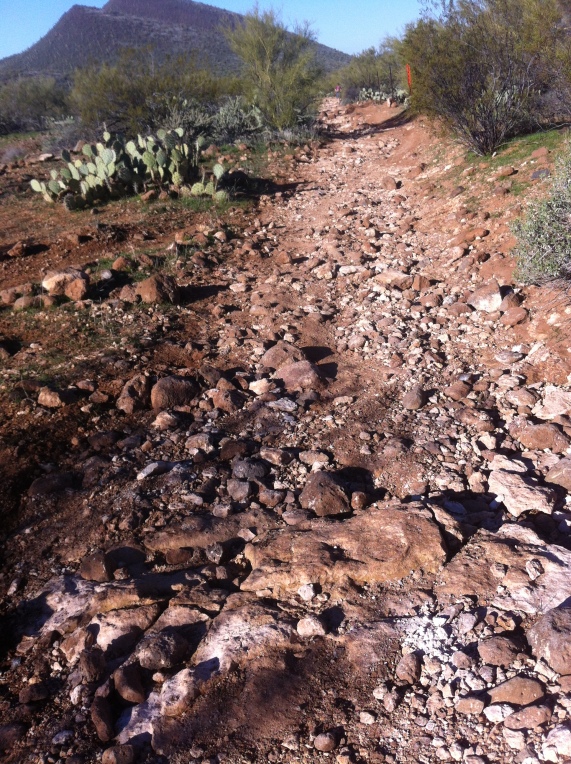 So many rocks. It was like a rock breeding ground. This was part of the out-and-back section to the second aid station…so you got to run through this (while avoiding runners who were already on their way back) and then turn around and go back again, this time being the runner heading back that others were dodging out of the way for.

There were a couple of lovely smooth sections between the first and second aid stations…a very small stretch of open dirt road, and some winding single-track. Yes, the smooth trail was exciting, but what I was so happy about was my ability to hit a smooth section and actually pick up the pace. 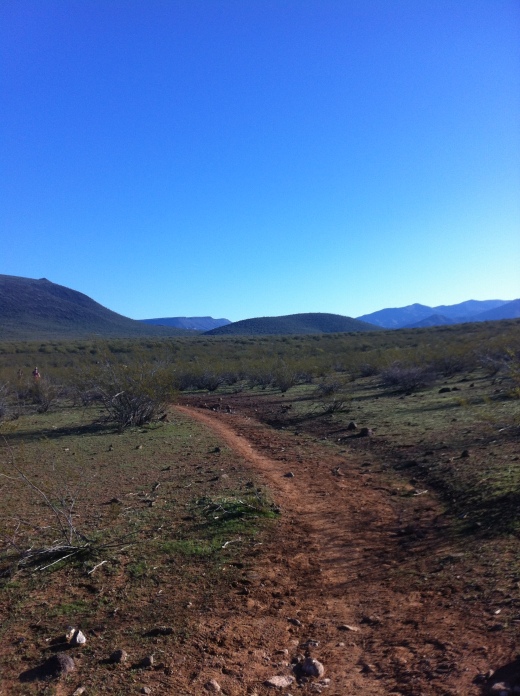 Smooth section on the out-and-back. Two years ago, on the “back” part, I was shuffling through here, thoroughly demoralized and blubbering/crying…which is really hard to do when you can’t breathe. This year, I sailed through here, actually putting some distance between me and a couple people behind me.

The second aid station (about 5.5 miles in) served as the turnaround point for the 22k. I stopped there for a couple minutes and made short work of several salted potato pieces, a few pickle pieces, a bean wrap, and a cup of Coke.

What I didn’t realize at the time was the trail in to the aid station, while it looked completely flat, was actually uphill…a slow, gradual climb over a couple miles, but still…uphill. Which meant going back was a gradual downhill.

Funky gate/crossing bridge. Part of the trail runs through leased grazing land, so there were a couple of gates and cattle guards along the way.

Back to the first aid station — more potatoes, pickles, some gummy worms, and a couple pieces of watermelon — and back out again. Shortly after the aid station, the course veered off the “straight back to the starting point” heading and took us for a “scenic route.” 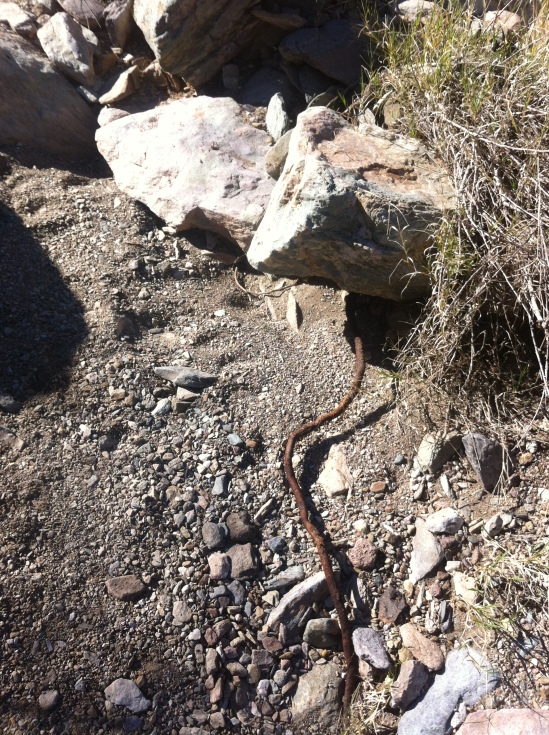 My “wildlife sighting” for the day — in the wash on the way to the first aid station, I glanced down and thought this root was a snake. Pretty sure my GPS shows a spike in speed at that point (and probably a sideways teleport).

I hiked this section of the course probably five or six years ago, but I had forgotten just how rugged and rough it was. Tons of slate and shale-type of rock embedded in the trail…razor-edge type of stuff that just lies in wait for an unsuspecting or lazy toe to grab.

I don’t have photos from this section because I was too busy paying attention to my feet. :) I underestimated this section a little bit — about 5 miles between the last aid station and the finish, and I thought it would go by a little faster. But between the technical nature of the rocks (I am slow in technical stuff…I really don’t want to roll an ankle or catch a toe and eat dirt), and a couple of good climbs (one was 300′ straight up in less than a quarter of a mile, stair-stepped into a huge slab of rock), it was definitely more slow-go.

It was at this point I fell back into my “but I’m almost done, I don’t need to eat” mentality, and started feeling it. When I realized I was still a couple miles out, I slammed a pack of gummy fruit chewies, and that helped…but should have done so a little earlier.

I made some good time on the last couple of miles, thanks to some beautiful, gradual downhills…and promptly lost all that time on any kind of uphill, when my hip flexors were like, “nope, we’re walking, thanks.”

Finished! (Ignore that ridiculously fast lap pace. It’s set to calculate the pace every mile, so since the mileage just ticked over from 14 miles, it basically “reset” itself on that last 100th of a mile…so it probably clocked my arm swing over the finish line or something.)

I was really happy with my finish time. I had forgotten how rugged and technical the course was, so to come in with a good time (for me), in one piece, having taken it easy over the rough stuff, and absolutely no injuries whatsoever, I’m calling it a win in my book.

Gear worked flawlessly. Arm sleeves got pushed down after the first couple miles and served as decorative wristlets/snot rags (sorry) until I got tired of them in the last few miles, yanked them off, and tied them to my pack.

I love my InkNBurn gear. It just makes me happy to look at it. That singlet was one of the first pieces I got and it’s one of my go-to favorites. I was super-happy with how the shorts did — I’ve typically run in longer compression-type of shorts since thigh rub has happened in other loose shorts. I slathered on preventative BodyGlide in the morning, and never had any problems all day. (Would probably re-glide at the halfway point for an ultra, though.) The looser fit made me feel a little cooler, and I didn’t miss the “busted can of biscuits” feeling that comes from me + compression gear.

Hoka Challenger ATR 2 are an A+. Was so glad for the cushion over the rough rocks. Was concerned about stability with all of the ankle-rolling sections, but that was a non-issue. Had a couple toe-grabs on the razor-edge shale in the last few miles when I was getting tired, but all recoverable.

Ultimate Direction pack was excellent…it probably deserves its own review, but suffice to say I’m really glad I got it. (Had one of the original ones, sold it, tried something else that I wasn’t crazy about, they re-vamped the UD pack, I bought the newest version and love some of the upgrades.)

Other miscellany to note: Wore my sunglasses after the first few miles. Eyes didn’t get tired. Didn’t trip on rocks/have depth perception issues. Verdict = Just wear the sunglasses. Gold star for remembering to put sunscreen on at 5:00 in the morning when it’s pitch black and cold enough for a puffy winter jacket. Yay for not getting sunburned in what is still technically the middle of winter. (It was a high of like 72* on Saturday. That’s my payoff for surviving 115* in the summer.)

So, what’s next? As I write this, I have raw sinuses and a runny nose…either allergies (revenge for spending my entire weekend outside) or the start of the cold that’s been going around. <sigh> Will take it easy for the next few days…if I’m feeling good, I would like to get another long run in over the weekend, because the weekend after that…

Not sure how March will shape up, but my plan is to just keep on building that long run foundation, do my cross-training, and plenty of recovery time in-between.