I doubt there’s such a thing as a truly “perfect” ride, whether it’s an endurance ride, a dressage test, a jumping round, or a schooling session. Every step, every moment, all perfect, nothing out of place? Not exactly realistic…

But degrees of perfect? Moments that end up seared in your brain forever for their feeling of absolute rightness? Those absolutely exist. For me, a good ride is one that leaves at least one of those moments as a permanent impression.

I actually had one of those moments last week riding Mimi. We were just doing some arena work…after almost 20 years, our arena work has become a pretty ho-hum, common-place thing. We both know what we’re supposed to do, but the motivation levels aren’t always there (from either party), and we have nothing to prove.

But I was feeling good after my Tahoe Rim completion (not even sore a week later), and she had obviously missed me after me being gone for a week (ran over to me from the pasture…even after only having been turned out for about 20 minutes before I got there), so things were just working.

We’d only been riding for maybe half an hour at that point, but we hit a moment where she gave me the most perfect trot ever. She was stretchy, balanced, had light contact but self-carriage…and I felt balanced, not fighting her, not flopping around, not a posed mannequin.

We finished our trot circle…and we quit while we were ahead. :) Like I said, nothing to prove anymore…and with a pony who doesn’t exactly love arena work anymore, what she gave me was a gift.

So she got a bath, and a roll in the sand, and a peppermint. 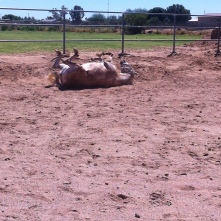 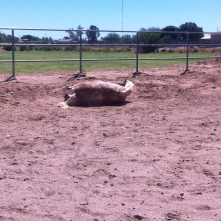 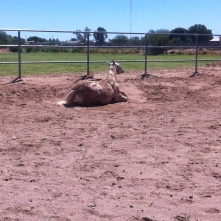 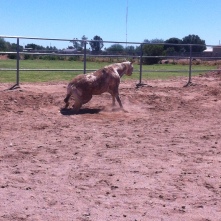 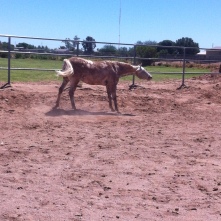 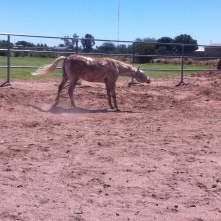 I don’t know when the next time will be I’ll get a moment like that from her, but she’s given me so many good ones along the way, if I take all of those moments and smush them together, they add up to about as close to perfect as a pony can get.

(And I’ve been fortunate enough to have some of these moments with other horses as well. Mimi’s my heart horse, but that doesn’t mean she’s the only one who can make me feel this way.)

3 thoughts on “Degrees of Perfect”