It’s summer in Arizona, which means it’s hibernation season. Other parts of the country may hibernate in the winter due to snow/mud/impossibly frigid temperatures…we’re sort of the opposite in that we ride in the winter, and then lay low in the summer. For the most part. Unless you have active ride goals and plans, and then you spend the summer getting up at 3AM to try to get a couple of hours of riding in before it gets unbearably hot, or you ride at night (still hot), or you trailer up to higher elevations (which are still warm but not quite as brutal).

Right now, I have no active goals, plans, or activities…and the part of me that likes sleep is really enjoying not having to get up quite so early. I’ll do it if I need to, but it better be a very good reason.

So right now is just about relaxing, enjoying barn time as I can get it, and trying to find a balance between heat acclimation (it does make Tevis crewing easier) and hugging my air conditioner.

I got a little lax with hoof trimming for the past few weeks, and she paid me back for it with longer-than-ideal front toes. *sigh* I can always tell, because her boots then don’t fit the way they should (long, low toe leaves a gap at the top of the boot shell). Trimming in triple-digits is always fun,but I’ve taken to standing her in a small pan of water as I’m working on one hoof, and doing a rotation around of “nip wall, trim bars/anything dying to some out of the sole, rasp, mustang roll.” This pony’s hooves still kind of drive me crazy sometimes because there are just so many things about them that are “not ideal,” but that’s one of the trade-offs of not having the power to create an “ideal” living environment for her, so until I’m in a position to be able to do that, it means a lot of proactive hoof management. (That I sometimes get lazy/slack off on and then she rewards me with long toes and higher heels. Owner fail.) 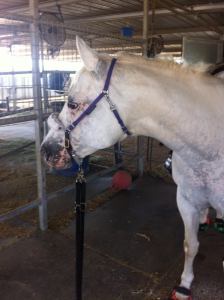 I really don’t get tired of just looking at this pony and spending time with her.

Today was a “good day” in Pony-ville. She actually really likes the warm weather (less-crunchy joints) so she was quite cheerful to have me doing stuff with her today. I also had to miss last weekend’s barn trip due to extra-busyness at home, so I think she may have actually been missing me.

And it was a “let’s mess around with headgear” day…I have a vosal that I’ve had for a number of years that I’ve played around with off and on, but never used on her for competition, mostly because I was never happy with the headstall it was on and that I could never get it adjusted short enough. After eyeballing my tack, I discovered the headstall for her s-hack is sized smaller than the vosal headstall, and that I had more adjustment with it. One swap later, and I was able to seat the noseband higher up on her nose.

Little peahead. My constant refrain when it comes to tack-buying has been “it doesn’t adjust small enough.”

We didn’t ride a ton today (really hot by the time I was done with hooves) but I really like how she worked in it. Super light in the face, which is a Big Deal in Pony-ville. Granted, it was the arena, which is not the most “stimulating” environment for her forwardness…but I liked it enough that I’ll probably keep messing with it. If nothing else, it’s something *different* and she seems to crave difference and change-up, even just in gear.

In a photogenic mood today and showing off for her new boyfriend. Someone please tell the 22-year-old mare that she’s too old to be that flirtatious?

And after riding, she got a full bath. Up to this point, she’s just gotten water-only spray-offs, but today was a full soap bath. “Yellowtail” is a type of fish, not a proper pony color designation. Plus her hind legs were all nasty and peed-upon from her aforementioned flirtations. And the flies and mosquitoes are out, so she’s itchy. And it was triple-digit temperatures. All good reasons for a thorough scrub-down.

I judge the temperature levels by her willingness to get her head wet — normally she really hates water on her face and it’s a wrestling match to try to get her face as white as her body.

Today, she stuck her head under the hose running at full blast and let me scrub her face and rinse it. Without me even holding her head down to a reachable level.

I have to say, she does look good for 22-years-old. Maybe a slight dip in her previously tabletop-flat back, and she has a *different* look to her face (more mature?)…but I’m very pleased with how she looks right now. Not fighting trim, but still reasonably fit.

And finally, she got a fly sheet today. The next-door neighbors at the barn train bucking bulls for rodeos, so there are a lot of cattle on the premises…which tend to attract more flies, no matter how good the barn protocol is for stall cleanup and maintenance (and it’s very good). The barn owner is apologetic, but there’s really nothing she can do about it — the downside of an area that has properties in somewhat close proximity to one another — but she’s willing to fly spray/fly mask/fly sheet all the horses as long as we provide the materials.

So one online visit to Riding Warehouse later, I found a flysheet that met my criteria of: belly band, neck cover (for mane protection — she sticks her head through the stall bars to get at her neighbor’s hay and has rubbed the middle section of her already-pathetic mane out), Euro cut, and not completely bank-breaking, since she has a history of being hard on sheets/blankets, and while I’m under no delusions that one will have a long, happy, snag-free existence, I would at least like to not cry when she does inevitably destroy it.

I ended up with the Saxon Softmesh Combo Fly Sheet. I will say the mesh isn’t quite as soft as they make it out to be…but good enough. And I’m guessing wear/dirt/washing will soften it up as well. 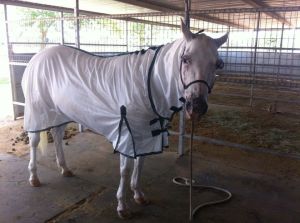 Unimpressed mare is unimpressed by the new addition. The look was definitely a “Really? Are you seriously going to make me wear this?” She should be grateful I haven’t gone off the deep end and gotten leg wraps as well.

Spotty pony! Her spots have gotten crazy — and you only see it when she’s wet, when her dark skin shows up through the wet hair. Sometimes you can kind of see it this time of year when she’s in her summer-bald coat. But she’s got a crazy Appaloosa blanket color pattern…had she not greyed out, she would have been a flaxen chestnut with the frosted blanket.But as striking as that would have been, I absolutely prefer her as a grey. It suits her. And makes her look even more like the little Arab she tries to be.

Another weekend gone, another week approaches. Monsoon season is starting, with a major dust storm last night and a minor one threatening this evening. Monsoon rain in the forecast…it’s just gotta cool off enough to not evaporate the rain out of the clouds. Summer plans on the horizon, some horsey (Tevis crewing, again) and some not (camping trips). Stay cool, pop electrolytes, and hug an air conditioner!