This is meant to be a tongue-in-cheek post stemming from good-natured humor and the observations of a native Arizonan. I promise not to name names or point fingers…this is all in good fun. ;)

A source of almost-constant amusement for me is the pronunciations and inevitable mispronunciations of the names of places and things around the state of Arizona. You can almost always tell if someone is from out of state by how they pronounce certain names. Many names around the state can be attributed to either the Spanish language influence (‘double-l’ makes a ‘y’/’ee’ sound, for example) or Native American names and language.

Here’s just a few of my favorites…

Spelled “Prescott,” it’s actually pronounced “Pres-kit.” It was Arizona’s original territorial capital, and is still a very fun city that has retained a ton of its Old West charm and character. Off the top of my head, this is probably one of the most mis-pronounced cities in AZ. (Although Tempe, just two cities over from me, is a close second. It’s “Tem-pee” with a long ‘e’, not “Tempeh” or “Temp-ay”.

Behind the pony is just one part of the Sierra Estrella range. That’s “Es-tray-yuh.” Not “Es-trail-la” or “Aus-trail-a.” I have also heard “Es-tray-lee-ya”. (They’re a truly rugged, magnificent range and I cant seem to find a good overview shot of them within easy access in my photos. I’ve done a number of rides out here — phenomenal trails.)

This is just one of many varieties of cholla cactus. “Choy-yuh.” Have most commonly heard “chawl-la” but also it is also frequently associated with the phrase “Ouch, dammit, get it off, it’s stuck to me!” 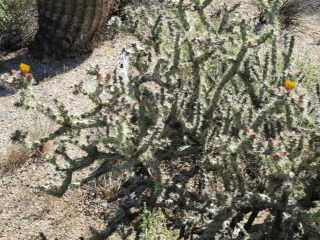 And this is an ocotillo, often crowned with bright red blossoms on the ends. When it’s green, it looks sort of soft and fluffy from a distance, but like all things in the desert…it is sharp and pointy. “Ock-oh-tee-yo”…I think the worst I’ve heard on this one is “ock-oh-till-oh.”

The big, tall cactus with the arms is a saguaro, unique to the Sonoran desert. “Saw-whar-ro”, not “sag-you-are-ro” or “sa-garrow.” That’s ‘The Bulldogs’ behind it, part of the Goldfield Mtns…stare at it long enough and it’s supposed to look like a bulldog’s head. I’m bad at seeing-eye type of things, so I’ve yet to really see it.

The Mogollon Rim is one I’ll give to people, because it’s not pronounced anywhere near how it’s spelled; at least, not really. It’s “Mug-ee-on.” This is a doozy: I’ve gotten “Mug-a-lon”, “Mongolian”, and many “not even gonna try it” attempts. Insider tip: Most of us just call it “The Rim.” There’s only one place like it, so if you refer to “the Rim” we will know you’re talking about the large plateau above Payson. Also considered the “gateway to saner temperatures in the summer.”

Some other things I can think of off the top of my head are the bougainvillea plant (“bow-gan-vee-ya”), Aravaipa (wilderness canyon located southwest of the Valley whose name inspired the name of the group I run with: “air-uh-vie-pa”), Mazatzal Mountains (which is a funny one: technically, it’s “mah-zat-zal” but locally, in ends up being shortened to “mat-a-zal”), and Galiuro (which should be “gal-oor-o” and I jsut learned I’ve been saying it wrong, as I’ve always refered to is as “gal-uh-roo-uh”).

I’m sure there’s a ton more I’m missing…we are a state of interesting names…but this concludes Lesson One in our primer of “How To Talk Arizona”. ;)