There are all kinds of entertaining quotes and applicable life lessons out there about “other people’s money.”

I think the endurance rider version is “other people’s horses.” Otherwise known as “my game plan for the 2013 ride season.”

The thing is, a lot of endurance riders have multiple horses, and someone always needs to be ridden. So thanks to some generous offers from several friends, I’ve already done my first ride of the season, and I’ve got rides scheduled to at least get me through the first third of the year.

First there was Kody at Fire Mountain. 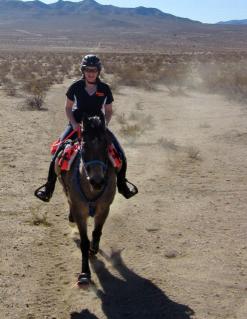 What was fun about Kody was that I first met him when he was a fuzzy little guy, less than two years old, and got to track his progress growing up, so to ride him as a mature, experienced endurance horse was quite fun.

Two weeks ago, I met Junior and we did a “let’s get to know each other” test ride. I’ll be riding him the first day of the Old Pueblo ride in Sonoita in two weeks.

No photos of Junior…yet…because it was off-and-on spitting rain the day we rode, I didn’t bring my camera, and I was riding two hands most of the way. Hopefully there will be ride pics after Sonoita.

Today, I met and rode Rocco.

That’s me and Rocco on the right. This pic — with the tongue sticking out — sums Rocco up perfectly. He’s a little silly, and a whole lot of fun. We’ll be doing a day at Sonoita…his first competition.

True, this wasn’t quite what I had in mind for my “perfect” ride plan…but as I’m very quickly learning, what you want doesn’t always happen in the way you expect. And if you sit around waiting for everything in life to be perfect, you’re going to be waiting a very long time.

Better to seize an opportunity that’s presented, even if it wasn’t according to your plan, because you can never really be sure about what it is you might be passing up. Just because something doesn’t happen the way it’s “supposed” to — at least by your definition — doesn’t mean that wasn’t the way it was supposed to happen.

Right now, I’m enjoying the opportunity to get to know a variety of different horses, and find out what I really like in a horse. And riding multiple horses is never a bad thing for improving one’s riding skills.

(Oh, and lucky me: So far, my saddle has fit all of them, so I’ve been able to ride in something familiar and secure.)

7 thoughts on “other people’s horses”

Ride packing and prepping, with my ever-present list...randomly scribbled as I think of things. At one point, with my own rig and competing pony, I had a cohesive, printable list... need to get back to that again. But with catch riding, so much changes from ride to ride depending on the horse I’m riding and the circumstances. In some cases (like now), I’m hauling the horse + trailer, so it’s akin to taking my own pony and rig to a ride again. Much more stuff involved. On the other end of the spectrum, I’ve got catch rides where everything, from horse to saddle to cushy place to sleep, is being provided, and just my personage and clothing has to be gathered together. Both are enjoyable in their own right. It’s fun to be spoiled, but it’s also very fulfilling to be back in the mode of taking care of all the ride planning myself again. #enduranceriding #endurancerideplanning #rideprep #packinglists #catchriding