Today, I embraced the one superstition that I follow — that whatever you do on New Year’s Day is what you’ll spend the rest of the year doing.  So I  listened to my favorite music while driving (which is pretty much an everyday given as it is, but whatever…), curled up with a good book, blogged, and of course… 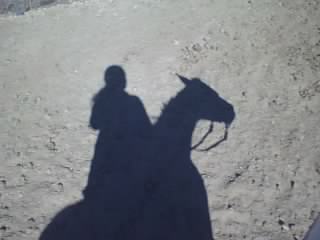 One of the popular clinicians has a game/technique/training tool/exercise called “Cruising” that can be best summed up as putting the horse on auto-pilot.  As in, drop the reins, hang on, and let the horse go.  Only rule is that the horse has to keep going.  No reins, no controlling where they go.  Just hang on for the ride.

For a Type A control freak such as myself, doing this is akin to torture.  Not only that, but I spent my first formative year of horseback riding in a huntseat English environment, which is all about lots and lots of contact, especially rein, with the horse, and that losing that contact is a fast way for your butt and the dirt to get really familiar with each other.

Spending the last 15 years riding a pony that is not only very forward, but has also perfected the art of the “drop-n-spin” (damn Quarter Horse blood), has taught me to ride with pretty constant rein contact, so I have maybe half a second warning before she pulls a fast one.  (The theory being that where the head goes, the body follows…It hasn’t always worked…)

So to challenge myself, Mimi and I went Cruising for part of our workout.  On one hand, it was kind of easy.  Mimi has extensive arena training, and would be considered to be a push-button rail pony: get her going and she just tracks along the rail, making circle after circle.  It was easy to get into a rhythm and just hang on while she motored around.  Exhilarating, actually.  Liberating.  One hand on the saddle (let’s not be too daring here…’member that spin-n-drop?) one hand free.

On the other hand: Mimi’s a pony.  Which means right about the time I start getting a bit complacent, her new favorite I-want-to-hang-out-at-the-gate-and-not-work attitude wakes up, she realizes that she can go wherever she wants to, and half a second later, she’s made a sharp turn and a beeline for the gate.  Yeah, glad I was still holding onto the saddle at the point.  It didn’t get her anywhere, since the only rule is that they can’t stop.  We looked like a pinball machine for a bit there, bouncing around in the corner by the gate until the pony resigned herself to the fact that her antics weren’t getting her anywhere.

And then I had to take up the reins again because I can only give up that kind of control for so long.  But for the remainder of the time, I was much more conscious about how much I was using the reins, and made a concerted effort to focus on lighter contact.

I’ve always had fairly soft, quiet hands when I ride…they’re just controlling and reluctant to give up that release.  (This is another good reason to ride in a hackamore.)  I sort of hate to admit just how much I rely on my reins for control, balance and staying on…but I’ve had too many instances happen of where I lost my reins and then was totally sunk to be comfortable without that early-warning system that comes with constant contact.

But hey, knowing a problem/weakness/area to work on is half the battle, right?

Caveat/Disclaimer/Et Cetera: I did this in a controlled environment — a 180′ x 75′ sand arena surrounded by 3-rail pipe fence and closed gates.  I did this on a trustworthy, reliable, sane horse that I am familiar with.  I kept the exercise to a walk/trot for now.  It’s a good trust-building exercise, and great fun for the horse.  But I would be very reluctant to try this on a young horse who isn’t ready for this kind of freedom, especially at anything faster than a walk.  It could go to their heads and get them a little overexcited and overwhelmed.  No way I would try this in an open environment.  Just use common sense and good judgment when deciding whether or not you and your horse are ready to try this.