I have a confession to make.

I probably can’t even count how many bits I’ve used/owned over the years.  Start between “a lot” and “a ton” and go from there.  It started with my show days and went from there.  I think I probably used seven or eight different Western bits over the years, starting with a snaffle and very quickly moving into all manner of ported/shanked leverage bits.  The joys of a young pony with no brakes and a young rider with no upper body strength.  Shortcuts R Us.  But I didn’t know any different at the time.   I was still trying to figure out how to ride a young horse, let alone train one.

English was easier…very quickly moved into a kimberwick and stayed there for pretty much our entire show career.

And gymkhana quickly complicated things again.  Snaffle while I was still teaching her the patterns, then over to a mechanical hackamore when we started picking up the speed.  But of course it couldn’t be that simple…maybe one style of mechanical hackamore works better than another?  And then on a whim, the week before our last show, I snagged an S-Hack while at the feed store.  I had done about a year of distance riding at that point, and had seen distance riders using them.  I figured I might eventually be able to use it.  The real whim came about at the show when I put it on Mimi (without any testing/pre-riding at all) and ran all of the games in it.  (And had some of the best runs ever.)

Mimi’s always been a bit fussy.  She has a low palate and a tiny mouth, and spends half of her time evading the bit rather than working with it.  My trainer and I spent a lot of time swapping out bits, trying to find one she would work in.  Fortunately, I learned my bit collecting ways very well from my trainer, and she had an entire box of bits to raid.

Distance riding also expanded my horizons and really furthered my education.  For the first time, I was really examining the why of things, instead of accepting that something was “traditional and always done this way.”  Bit function was one of those areas of education, and that exploration brought me to the Myler bits.

I’ve gradually gotten rid of all of my other bits in favor of just keeping the Myler ones.  I really appreciate their form and function and how they’re designed to work with the horse.  I feel like I end up with more of a connection and softer feel of the horse’s mouth.

(Not a spokesperson/representative/paid mouthpiece for Myler.  I just really like the product.)


And irony of ironies?

I barely use any of the bits I have.

As mentioned, Mimi really doesn’t like bits.  She tolerates the Myler ones.  But she prefers to go bitless.  Remember that S-Hack I mentioned earlier?  Yep.  That’s her preferred headgear of choice. 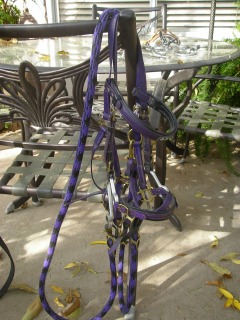 It sort of looks like a jumble of purple spaghetti, but that’s Mimi’s trail bridle.  Zilco Deluxe Endurance Halter/Bridle with the Wind Rider Aluminum S-Hack and Hought Beta-Biothane Noseband.

I really like the flatter beta nosebands that are out there now…much easier on their faces than the stiff rope-style nosebands.  I’ve seen the rope-style used on horses that pull, and they eventually develop a bump on their nose from rubbing/pressure. Several layers of Vetwrap is supposed to combat this…

My major caveat on the hack: I prefer to use it on a horse that’s already well-schooled in giving to pressure and going along nicely in a bit.  Mimi responds really well to it, and I think a lot of that is due in part to the fact she’s just happy it’s not a bit, and therefore will cheerfully obey without fuss.

It still took me a couple of years of doing NATRC to work up the nerve to try it on her at an actual ride.  She did great when I did finally use it, but then right about that time I started getting involved in endurance, and the idea of the faster pace and more race-like environment had me scrambling back to my comfort zone of a bit for our first year of endurance.  October 2007, I used the hack on her at a ride, and haven’t gone back to a bit since, except for schooling.

My preferred set-ups for schooling at the moment.  Myler Kimberwick with Comfort Snaffle mouthpiece (MB02).  It’s considered a “Level One” (mild, typically used for intro level) mouthpiece.  I like that it acts very much like a double-jointed snaffle, but it has less “play” in it and it’s less work for the horse to hold it in their mouth.

I pulled off the regular kimberwick curb chain and replaced it with a biothane curb chain, because 1) the constant jingling from curb chains annoys me and 2) I’m lazy and hate having to always fiddle with the on/off of a curb chain.  I like the ability to switch between the curb and snaffle setting on a kimberwick.  When I was competing with this bit, I’d often start with the reins clipped to the curb setting, then switch to the snaffle setting after she settled down and quit pulling. 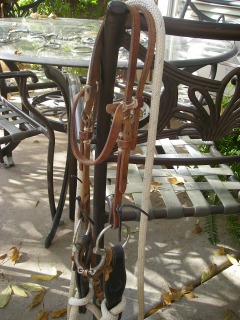 My only grumble is that they only stock the kimberwick in 5″ sizes.  Myler bits tend to run just a touch on the large side anyway, so 5″ is really too big for pony’s pea-head.  They do custom orders , but I use a bit so little now that it hardly seems worth it.

Exhibit B is my “cowgirl” set-up.  Myler Western Dee Snaffle with Sweet Iron Bristol Roller (MB11).  Also a Level One bit.  It’s basically a “dog-bone” double jointed with a little spinning copper roller around the middle of it.  Mimi works well in it, mostly because I think she likes the copper and sweet iron.  She tends to drool and slobber after a while because she’s so busy working the spinning mouthpiece.  Not a good bit on days when we’re working on “quiet mouth.”  Rides “looser” than the comfort snaffle because the joints on the snaffle have a lot of play between them.  Not as good in the “subtle communication” department.  But it’s a pretty bit that appeals to my inner cowgirl.  (Me, shallow?!?)

And then I’ve got several “homeless” bits…ones that live in my drawer of extra tack, ones that are either similar to something I’m already using, or have been tried and discarded as absolutely unsuitable by the Pony Committee of One.

I’ve used all of these for training and rides (except the jumping hack…haven’t done a ride with that yet, want to replace the noseband with one of the beta ones) at some point.  The Western D was a good ride bit and I used that one several times, but the flat mullen mouthpiece made eating more difficult.  A like something with a little more “lift” in the mouthpiece and more room for the tongue.  The Loose Ring Snaffle is kind of a joke…I have more ride pics of Mimi’s head almost vertical as she gleefully ignored my requests to slow down.  And the full cheek snaffle is relegated to used as a training bit under strictly controlled circumstances only.  Those full cheeks, while wonderful for teaching a young horse concepts like turning and steering, really suck when they get caught on various things…like the cheekpiece of the bridle, or your belt, or the water trough…ask me how I know this.  ;)

And of course, I have a couple other bitless rigs floating around as well.  This one’s a vosal…mechanical interpretation of the old-time rawhide bosals.  I’m on the fence about this one.  Definitely a lack of fine-tune control.  No side-to-side lateral control whatsoever.  I still keep it around, though.
Not pictured is a traditional sidepull.  Well, the braided nylon variety of traditional.  It lives down at the barn as my “backup” headgear, but I rarely use it other than for aimlessly wandering around the arena for a few minutes.  Requires way too much force to get Mimi, in a strong-and-opinionated mood, to listen to it.  But I keep it around because it’ll probably be a good young horse training tool in teaching them to give to pressure.  But Mimi needs a little more authority in the form of the curb chain and leverage of the S-Hack.
And I have, of course, the rejects.  Those aren’t pictured, since they got sent on their way a while back.  Aside from some of the show bits, I’ve gotten rid of comparatively few bits and/or headgear that I’ve used for distance.  The ones that stick in my mind are:
– Myler Combo Bit with triple barrel mullen mouthpiece.  I didn’t care for this bit at all.  It was too fussy to mess with, harder to use with a halter-bridle on pea-headed ponies, and it just seemed like it was too much at one time.  Mimi hated it and fussed a ton with it on.  Down the road it went.
– Myler Kimberwick with Forward Tilt Ported Barrel (MB36).  I liked the comfort snaffle mouthpiece better. This was one of their Level 2-3 bits, and it was a lot of bit.  It was great for the arena, but I tend to have “controlling hands” when out on trail, and prefer to ride with a mouthpiece that is a bit lighter and doesn’t give them so many signals at once.  Plus, I don’t think Mimi’s tiny mouth accommodated the more forward set of this particular mouthpiece.  Didn’t see the sense in leaving it around, so…sometimes I wish I’d held onto it, jsut in case I need it again.
– Dr. Cook’s Bitless Bridle.  As far as bitless goes, not my favorite option.  Used it on the latter half of a NATRC ride and spent that seven-or-so-mile loop feeling like I was getting the proverbial middle ringer from the pony as she gleefully barged through it.  Nice.  Also didn’t like the fact that it was tough to get it to release the pressure once it was tight.  It found a new home pretty quickly.
To a lesser degree, I passed some of the bit interest along to Dad.  His horses have been less complicated.  Lucky him.  His Foxtrotter mare Kelly came to us with a good old Tom Thumb snaffle and a habit of head-tossing.  Gee, wonder why?  We quickly swapped her over to a Myler short shank comfort snaffle and the head tossing really settled down, then several years later, put her in the same Myler kimberwick as Mimi.  She really loved that bit, and when she went to her new home, we sent the bit with her in an effort to keep her happy and encourage the new owners to keep using said bit.
Beamer was even simpler…Myler English Dee snaffle with French Link mouthpiece (after schooling him in my Loose Ring snaffle…but the English D doesn’t have the same “pull through the mouth” potential as the smaller-ring cheekpieces, and therefore doesn’t need a curb strap attached…one less thing to fiddle with) for several years, and then transitioned him into an S-Hack.  Sent both of those along with him, since he works well in both, but prefers the S-Hack.  (Anything that makes eating easier…and it’s less work, not having to carry a bit.)
And I have no doubt I’ll still keep collecting as I eventually expand the herd, since I’m big on each horse having their own bit.  You might say I’m a bit obsessed.  ;)

4 thoughts on “A Bit of A Collection”