Hehehe, so much for regular updates…um, I blame school?

Actually, I got really busy, and everything kind of hit the fan after Man Against Horse. Mimi came out of that ride badly…it was by the skin of our teeth that we passed the final vet-out, because she was moving very weird. 2 weeks before, I had thought she was lame, but then thought the massage therapist fixed her. Felt a little more bouncy than usual, especially at the first part of the ride, then the vet made a comment at the check about the odd way her back legs, especially the right hind, were moving.

By the end of the ride, she was definitely sore. After we checked out, she went back to the trailer and curled up, looking find of miserable. Not her usual post-ride behavior. Even tried a tiny bit of colicky type of behavior, I think now it was because she was hurting.

Ended up bringing the vet out after we got back from the ride and springing for hock x-rays, which revealed that she’s losing a lot of cartilage in her right hock and starting to get a bit of fusing. Tiny bit showing up in the left, but not as bad. So I went ahead and had the vet do the hock injections…basically, the ones that help to replace the lost joint fluid. It’s like I have a whole new pony. She’s smooth and springy and happy again, and our endurance career is back on track!

Had a 5 week break from school, much of which was spent conditioning to get the ponies ready for their first 50 miler coming up next weekend – Land of the Sun in Wickenburg.

Been experimenting for the last several months with Renegades – http://www.renegadehoofboots.com/. Kirt and Gina make a fantastic boot – super easy to put on, and they stay on! They’ve been in the experimental production phase now for the last couple years, and Dad was one of their first guinea pigs. Now that they make them small enough, I’ve been using them on Mimi. I had been using an 0 on her…a size too big, but I was able to manipulate it down to where it fit. Now, we’ve got 00 boots, and they’re so cute! They fit her great, and they look adorable…sparkly golden yellow for Skip Me Gold! Appropriate.

So, needless to say, after having a bit of a downer ride at Man Against Horse, I really didn’t want to write up a whole ride story. The highlights:

-Dad got bucked off at the start when his saddle slipped as he was mounting and Beamer spooked and bucked. After that, though, the horse was an angel, and did quite well for his first LD ride. He enjoys trotting. Wasn’t so amused by the 1000-foot-elevation-in-4-miles climb up to the vet check, and he kind of trudged up the hill at the end, but after some food and water, he became quite cheerful again. (Dad’s thoughts: this is a highlight, how?)

-Due to the above reason, we got almost an hour later start. Consequently, we made it in with 7 minutes to spare…and we weren’t even the turtles! I took that title home last year, thank you, when we tried to turn Dad’s foxtrotter into a LD endurance horse. Didn’t happen, and we straggled in, literally in the 11th hour. Actually, the 5:59th hour, since this is an LD…
-Had we not started so late, we would have finished mid-pack. Eh, life. At least we finished. As it was, we came in 41&42 out of 47.
-The weather was perfect. Normally, Prescott is super windy, especially in the foothills of the mountains. Not so in this case. Friday was insane. Blustery, cloudy, cold. But Saturday more than made up for it, with just a light breeze keeping the air moving. I think the high was in the high 50s that day. Absolutely lovely.
-It really is a fun trail, although I call part of it my Tevis Practice Trail, because it’s a switchbacking singletrack that winds its way down the side of the mountain with a 1000 foot drop, and nothing but manzanita and a few pine trees to catch you. Urgh. Lots of “don’t look down” mantra happening. And singing. I have a horrendous singing voice, but I found that singing makes me breathe, and keeps me calmer, and thus, my horse. She doesn’t mind my singing…pony must be tone deaf. 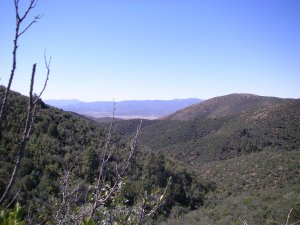 The view from about 3/4 of the way up to the first vetcheck. This is about mile 11 or 12 on what is called Grapevine trail. Beyond the mountains is Prescott Valley. 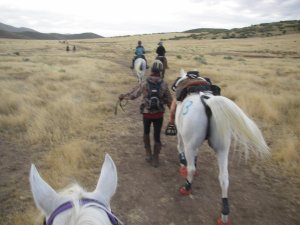 Dad and Beamer at the start…before the airs about the ground. Walking him out doesn’t really work…he’s much better if you’re in the saddle. 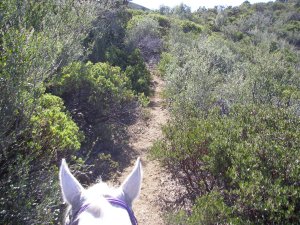 Pony!Cam shot of going up Grapevine. This is what a lot of the trail looks like…narrow, twisty, and covered on both sides in manzanita. Every year I’ve done this ride, my leg wraps have gotten a new rip or tear. Better them than the pony’s legs.