Nothing like waiting for several weeks after the show to write about it, eh?

The long and short of it:

+
+
=
This weekend’s shenanigans.
Pony and I are going full circle. I got a wild hair and decided to go compete in a couple of English classes at this weekend’s POA show. Yep, we’re going back to our roots, for a change of pace, to have some fun, and get out and do something again. Just for fun, the AZ POA club has been offering 19 & Over classes (the POA organization is for 18 & under youth riders, with the exception of the 19 & Over Futurity classes) and so I decided to try it again.
Benefit was that I still had all my English gear (with the exception of black gloves, which had long been sacrificed to the endurance trail and had the fingertips cut off), my endurance saddle just looks like a generously-sized English one with a few extra d-rings, and the show grounds are close to the barn, so no trouble borrowing the truck and trailer again. Plus, Mimi and I have always been better at English classes than Western..so we’re going to go and do what we do best, since it’s just for fun. :)
Artemis is going to come along with us as well, since it’ll only be for a couple of hours on Saturday afternoon. It’ll be good for her to get out and go to another event again, too.

I’m really looking forward to it…2002 was our last show, so I’ve actually been distance riding longer than I had been showing…I’m eager to “take what I know now” and re-apply it to the show ring. Not that I have any expectations, really…I’m out of the habit of show ring riding, and so is Mimi…but we’ll go, and have fun, and see old friends again.

And I get to have a very interesting time tomorrow, bathing a fuzzy pony back to her sparkling white self again…it’s a good thing this is advertised as the “sleek or fuzzy” show… 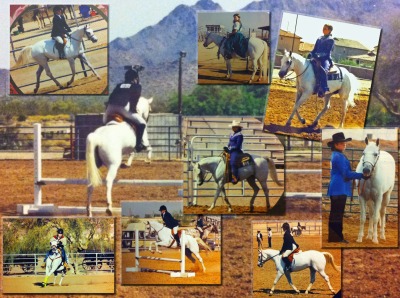 Despite being out of it for 10 years now, there’s a part of me that still kind of misses the show arena.

Stepping onto the WestWorld show grounds today, there was an immediate sense of familiarity.

I went up to the annual Scottsdale Arabian Horse Show today to spend the day. I perused the vendor tents (found that orange rope I was looking for…and finally replaced my 10-year-old Terrains), spent some time in the barn of Al-Marah Arabians, and watched the classes that hold my interest: reining and dressage. And the advent of the Arabian Sporthorse division really intrigues me.

There’s a small part of my brain that starts whispering in my ear as I’m watching, “Imagine what you could do now…knowing what you know now.”

Especially since showing at Scottsdale has been a dream of mine for a very long time. I’ve been attending that show — not every year, but a good many of them — since I got into horses, roughly 20 years ago. And I’ve decided that when I do have my own Arabian, I will show at Scottsdale. No commitment as to in what or when…but I will do it.

I feel sort of bad, because Mimi has all but shed out the majority of her winter coat.  She’s a pony…she can grow it in again overnight, right?  (If I feel too guilty, there’s always one of her ancient blankets that lives down at the barn that can be pushed back into service if absolutely necessary.)

But I don’t think it’s so much a delayed reaction to the groundhog as it is the weather obeying tradition.

This coming Thursday is the start of the Scottsdale Arabian Horse Show.

Every year, it rains around the Scottsdale Show.  Typically not the entire time…but the weather patterns seem to take great delight in dumping at least a couple days of cold, unpleasant weather on determined show-goers.

Not that it really seems to stop people…especially anyone that’s there for the shopping, since the majority of the vendors are under covered tents.  Besides, it’s a good excuse to buy (another) raincoat.

It’s always a fun time…a great place for impulse buying, eating some truly yummy food (and you’re walking the whole show grounds…a perfect excuse to munch all day long), and watching some spectacular Arabians (the people-watching can be kind of interesting, too…).

It always makes me a bit nostalgic for my show days, despite the fact I didn’t show Arabs.  Part of me misses the glitter and sparkle, fuss and frenzy.  And then I remember wearing suede chaps or velvet hard hats in 90*+ weather and I don’t miss it so much.

But I always thought it would have been fun to show an Arab at Scottsdale.

The show technically doesn’t start until Thursday, so I think today is just the weather warming up (cooling down?) for the big event.  Tomorrow is supposed to be bright and sunny again, but Thursday?

Ponies can be summed by by the statement of one simple fact: “Pony” is a four-letter word.  Their behavior can be passed off with a disgusted shake of the head and a an under-the-breath mutter of “Pony.”  Or it can result in a bemused grin and a delighted exclaimation of “Ah, ponies.”

I’ve been around ponies in some capacity for my entire equine life.  The last 13 years, I’ve been owned by one.  I wouldn’t change any of it.

Ponies are an education unto themselves.  They can be alternately sweet, mischievous, bratty, irksome, playful, grumpy, and winsome…all within the space of a day.

Fortunately, my time around ponies has been spent with what I consider a very special breed — the POA.

The Pony of the Americas is a rather unique pony breed.  They’re much more similar to a small horses, both in confirmation and attitude, than a typical pony.  Say the word “pony” and most people think of Shetlands…short, fuzzy, and ornery little things that delight in unmounting their riders.  Not that all of them are that way…but a breed reputation does have to develop from somewhere.

The POA was originally developed in the mid-1950s, and the foundation registered stallion named “Black Hand” was the result of an Arabian-Appaloosa mare crossed with a Shetland pony.  Breed standard calls for the confirmation of a small horse instead of that of a pony.  They are to have the spotted coat and distinguishing features — white sclera around the eye, striped hooves, skin mottling –of an Appaloosa, an athletic, well-muscled body, and a more elegant head and neck.  Breed standard calls for a height of 46″-56″ (11.2-14hh).

Above all, the POA is a children’s breed and organization.  The only classes adult can show in are the in-hand Halter classes.  All other classes are for those 18 and under, and divided into four age categories.  Its main purpose is in showing, but one of the hallmarks of the POA is its versatility.  The shows themselves encourage ponies and riders to try a little bit of everything, and then further incentive programs are offered for outside sports such as distance riding.

During my years of showing with Mimi, my typical show day would look something start at 6am, and go until at least 6-7pm.  During that time, we would do in-hand Halter and Showmanship classes, then move to the under saddle classes, both Western and English.  Western — Bareback Equitation, Stockseat Equitation, Western Pleasure (two classes, one for the pony’s age group and one for the rider’s), Trail, Reining, Western Riding.  English – English Pleasure (again, two classes), English Equitation, Hunter Hack (combined flat/jumping class), Hunter Over Fences, Equitation Over Fences, and Open Jumping.  After that, it was Gymkhana.  6-8 different gymkhana games, depending on the show.  A typical offering would be Pole Bending, Barrels, Texas Rollback, Single Pole, Handy Horse, and Flags.

So, we’ve established that POAs are versatile and have endurance.  Is it any wonder Mimi came into distance riding with a good base on her?  POAs have also shown their mettle in just about any other equine sport that’s offered, including distance riding!

But what’s so amazing about the POAs is their attitude.  They are not your average snotty-brat of a pony.  The sweetest and most willing equine I’ve ever had the priviledge of knowing and riding was a POA…CSA’s Snapdragon — “Snappy” — was the first POA I rode and showed.  He was an absolute gem, and in all of my years around him, I never knew anyone that fell off of him.  He was the one that taught me how to love horses and riding again, and gave this very scared little girl back her courage and showed me how to have fun on horseback.

And 98% of the POAs I’ve known have shown at least some degree of that sweetness and willingness.  If it says anything, I would consider another POA as my next endurance horse if I found one with the right confirmation.  That’s the trickiest part — current trends have been producing big, muscular, Quarter Horse-inpsired type of POAs…not suitable for endurance.  But POA registry is open book, meaning POAs can be crossed with other breeds, and as long as they have the marking characteristics and meet the height requirements, they qualify for registration.  Which is how Mimi is actually half Quarter Horse, and still registered POA.  Every so often, a half-Arab POA shows up…that might be a good endurance cross!

Sorry for the complete lack of pictures…all of my show pictures are old school, menaing film camera.  Meaning I still have to scan them into my computer in order to do anything with them.  And seven years of showing is a lot of pictures.

That’s my girl. ❤️ Feeling much more herself. Snotty nose appears to be gone and she’s down to a random intermittent cough that’s doing a good job clearing out the last of the crud. We may have had to miss Wickenburg this weekend but keeping fingers crossed that we’ll be all systems go for Old Pueblo in a couple of weeks. #liberterra #endurancehorse #shagyaarabian #enduranceriding