In my last post, I touched briefly on the topic of my old Big Horn barrel saddle, and how I’m pretty convinced it’s the one saddle I can never actually get rid of…because after not touching it for several years, it’s suddenly the saddle that’s working best for me.

This is one of my last holdovers from my show days. I got the saddle back around 2000, shortly after I upgraded my western show saddle, and didn’t want to use my “nice” saddle for almost-daily riding/lessons. In addition, the nice (heavy) western saddle wasn’t all that conducive for being used as a gymkhana saddle, either.

So I saved my pennies and bought the Big Horn — it was my first saddle I bought for myself completely on my own, that also didn’t require selling another saddle in order to get it. I don’t remember the exact model number, but it’s their Cordura Barrel Saddle with Full QH bars.

When I started taking Mimi out and trying our hand (hoof?) at trail riding, it was my go-to saddle. No way was I going to put “desert pin-striping” on my show saddle…and there was no way I was going to brave the trails in my English saddle. (Famous last words, as English saddles are now my go-to preference.)

That Big Horn saw us through a year+ of conditioning and to our first NATRC ride in the spring of 2001. Despite jigging for 90% of the ride, Mimi finished with no back soreness, and we came away with 1st place in both Horse and Horsemanship for the Novice Junior division, then repeated the performance two months later at our second ride.

However, I was less than enamored of the horn on there, after hooking my NATRC number bib on it a couple times, and my knees were also calling in their complaints over the western fenders. (And given the fact I was 16 at the time, I thought that was a little unfair for my body to already be finding something to bitch about.)

Since we had survived two NATRC rides and I had determined that I actually had a really good trail pony in Mimi, I decided to be brave and try an English saddle. Got a Wintec Endurance saddle, and spent a couple of years with it before Mimi’s ever-broadening frame outgrew it.

By this time, I had already been to Tevis to crew and been bitten by the endurance bug. The Wintec wasn’t working, and I was hemming and hawing over what to do for the next saddle. In the meantime, the Big Horn was still patiently sitting there.

And since it was just sitting there being a dust-catcher, my dad suggested I try sawing the horn off — what did I have to lose if it was just going to sit there anyway? So out came the hacksaw, and off came the horn. A couple of wraps of some leather scraps around the pommel and from a distance, it looks like a regular endurance pommel.

(It was over 10 years ago this act of saddle butchery was committed, so I’m a little hazy on the details. I just know I got dad to do the actual sawing part, since I was afraid I was saw my saddle in half or something. Plus there was a part of my show ring upbringing that was a bit horrified about the idea of sawing apart my saddle.)

A bonus to this was the saddle had always been pommel-heavy on the balance, so sawing off the all-metal horn actually lightened up the front end of it a bit.

I had also done some internet perusing and found 2″ wide, super thin and flexible biothane fenders to replace the bulky Cordura fenders, as well as converter straps to turn western latigo rigging into an English billet set-up.

I trained all summer in this set-up, and was very pleased with how it felt. An added bonus was the extra security I felt in it compared to the English-style Wintec, and since Mimi and I were venturing out for our first solo training miles, it was a little extra reassurance for me. (Not that I actually needed it…she’s just as bold and non-spooky by herself or with company.)

We did 3 LDs, plus another 4 NATRC rides in this set-up, overall quite successfully. The only time she ever had any soreness was when I deviated from using the tried-and-true purple Skito pad and experimented with an Equipedic.

Along the way, I also added some extra rings to the pommel, and a crupper bar to the back.

Unfortunately, the saddle wasn’t all that comfortable for me. It has a pretty wide twist to it, and I would generally finish rides feeling worse for the wear. When the idea of 50s started looming, I decided I could not handle 50 miles in that saddle, which is when I ended up getting the Duett Companion Trail that I’ve done the vast majority of my endurance miles in.

The Big Horn has lived down at the barn as my back-up saddle, or for the days that I just want to grab a quick ride and don’t want to pull the Duett out, haul it out to the vehicle, lug it around the barn, and then reverse the process to come home. (It weighs like 22 pounds without any fittings, so it’s not exactly a featherweight thing to heft around.)

A few weeks ago, I had one of those days where I wasn’t committed to the idea of riding…until I got down to the barn and decided that I did want to ride. Hopped into the Big Horn…and hold on, when did this saddle become this comfortable? I’ve been paying a lot of attention to riding position and form over the past year, and when I sat in the Big Horn, I didn’t have to fight to find my position. I felt very balanced, and nothing felt forced.

This past weekend, I did two days back-to-back in it. My seatbones were a little sore, but I think it’s because it’s a slightly harder seat, even with a fleece cover, and wider than the English saddles. But not uncomfortably so. The “too wide” twist that had bothered me previously now feels really good.

Over the years, I’ve messed around with the different fittings on the saddle to end up with its current iteration:

Fenders have been replaced with 1″ English Zilco “leathers” covered with JMS sheepskin fleeces.

Rings added to pommel. Can clip the breastcollar to them or use for securing packs. 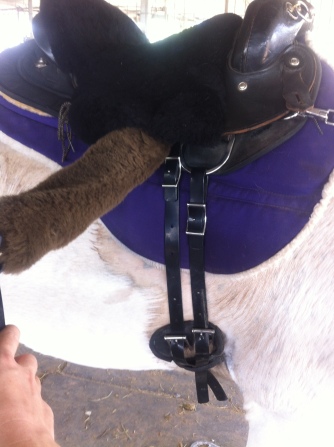 I’m really satisfied with how I’ve got it set up. JMS Deluxe Western seat cover, JMS covers over 1″ Zilco leathers to replace the fenders, and biothane English billet straps have all been the major contributing factors for ease of use and comfort.

And I’m getting a chuckle out of the fact that 17 years later, this saddle has once again become my go-to saddle.

4 thoughts on “Big Horn Saddle: From Barrel to Endurance”